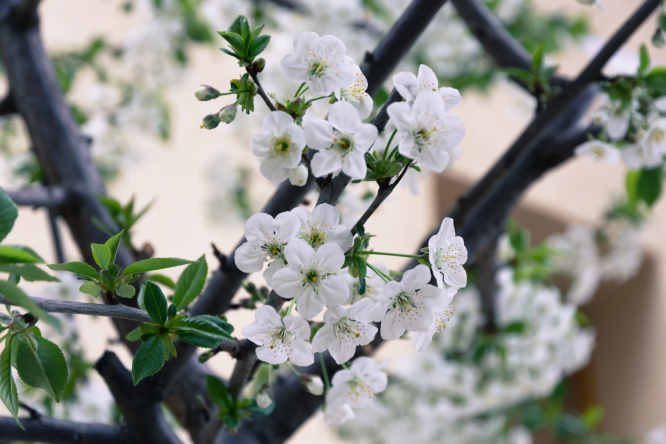 Mirabelle, cherry and pear trees and more are all at risk from freezing overnight temperatures this week Pic: @iamsherise / Sherise VD / Unsplash

Temperatures are forecast to fall sharply today in France, with snow and frost expected especially in the north and north east of the country.

Hail showers and snow may be seen even at low altitudes from Hauts-de-France to Grand-Est, down to Bourgogne-Franche-Comté, as well as in the northern Alps, Météo France has predicted.

Temperatures will be coldest in the morning, hovering around or below zero in the northern half of the country, with rainfall in the south west and strong winds in the south.

During the day, temperatures will rise to between 6-9C in the north and up to 10C in the west – but snowfall will start.

In the south, temperatures of 9-14C are forecast from the north to the south of the Rhône river. Nouvelle-Aquitaine and Occitanie will reach around 11-15C, and the warmest temperatures, of 16-17C, will be on the Mediterranean coast.

Freezing night-time temperatures are expected tonight, April 6, and tomorrow, posing a risk to fruit trees which have already begun flowering.

Mirabelle, cherry and pear trees, and strawberry plants may all be unable to produce fruit in the coming months if they are over exposed to freezing weather.

Here’s how to limit the damage:

Farmers too are worried about the impact of cold temperatures this week.

Plants such as beetroot, roquette, courgettes and vines are all sensitive to exposure to cold weather.

Vincent Tillement, a farmer in Moselle in the north east, told FranceInfo he had covered his plants with a protective fleece, but was still concerned.

He said: “The problem is that they have announced cold temperatures that will last overnight. It’s worrying knowing that the plants will spend three, four or five hours at -2C .”

In Limousin, farmer Laurent Rougerie was worried about his apple trees, after losing half of his harvest last year.

He said: “We will do everything we can to protect them. Then we will come back at the end of the week to assess the situation.”