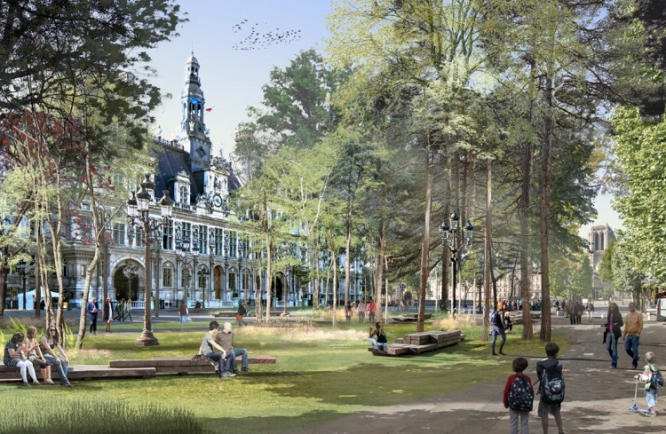 For the first time, almost all the candidates include ecology to varying degrees in their manifestos.

Paris mayor Anne Hidalgo (Socialist), who is hoping to win a second term, has said that the environment is at the heart of her campaign. She wants more bikes in and more cars out of the capital and promises to add 400km to the existing 1,018km of cycle routes by 2024.

One of her rivals, mathematician Cédric Villani, who is running as an independent after failing to win the nomination for LREM, said he will plant more trees, invest €5billion into making buildings energy-efficient, and also create more cycle paths.

More recently, LREM has been rocked by a number of MP defections.

It now has 300 MPs, compared to the 314 that were elected to office in the 2017 elections. A number of those who have left have cited the environment as a reason for their defections.

The environment is a major concern for voters, polls show.

The issue came top in an Ipsos poll for Le Monde and second (after security) in an Odoxa-CGI poll for regional newspapers and radio station France Bleu.

Nearly one in two people said they thought mayors were not doing enough to preserve the environment.

Pressure on prospective councillors has also come from environment agency Ademe, which has intervened for the first time in local elections to produce a guide for candidates on how to “green up” their programmes.

A total of 60 environment charities, including Greenpeace, Secours Catholique and Amis de la Terre, have drawn up 32 measures in a Pacte pour la Transition to persuade local councils to concentrate on a range of ethical measures. They include responsible buying, financing ethical projects, offering organic and local food in canteens, and introducing incentive-led waste schemes.

Spokesman Théo Rougier said the elections, in two stages on March 15 and 22, will be vital for climate change: “The French government and Europe are way behind in doing what is necessary to prevent global warming getting worse and think there is a better chance that communes can change things.

“Mayors and councillors can make a difference. They are close to their citizens and will be in power for six years, with time to introduce new measures.”

He said the public is increasingly ready for change: “It is frustrating because change never seems to come fast enough, but from our perspective there are signs that things are starting to happen.”

He said most candidates in most big cities had promised to sign and adhere to the Pacte pour la Transition.

The Fondation Nicolas Hulot pour la Nature et l’Homme contributed to the Pacte. The association was set up 30 years ago by former environment minister Nicolas Hulot, who stepped down in 2018, saying the environment was always relegated to the bottom of the list of priorities. He wanted his resignation to be a wake-up call.

Samuel Leré, from the Foundation, said communes can make important changes. “A total of 15% of greenhouse gases are caused by individual cars.

“In Denmark, 20% of the population use bikes for transport. In France, it is 3%. Adding cycle paths is a political choice which can make a difference.

“If more organic and local food was on the menu, that too could make a difference.” But he warned that real policies are needed, not just those which appeal to voters: “It is not just about planting trees, but also about profound changes, such as investment in eco-housing.

“Limited resources need to be directed to the right projects. The message is beginning to get through but we have already lost a great deal of time.”

Mohamed Gnabaly is mayor of Ile-Saint-Denis, Paris, vice-president of Association des Maires de France, and sits on its environment commission.

He told Connexion: “In the last election, campaign environment issues were often seen as negative, and now they are seen as a positive impact for the future.

“That is a great victory. There has been a big cultural change in society.

“A mayor can do many things. In my poor, urban commune, I have introduced 50% organic and 50% vegetarian food on school menus; 100% of food waste from the canteens is made into compost, which is used to grow flowers in a farm in our commune.

“We have renovated public buildings to improve energy efficiency, which will save us 5% on our electricity bill.

“In our small commune with 8,000 inhabitants, we have introduced solar panels in a 2,000m² site and electric cars. I believe that, in 2020, all mayors need to put environment at the heart of every single one of their projects.

“However, mayors cannot act alone. The government does not consult us over new laws.

“If the government decides to ban all old diesel cars tomorrow, they should talk to us to find solutions to solve the consequential lack of transport in rural areas, and the needs of poor areas like mine.

“Mayors are angry that they are not part of the decision-making and feel laws are forced upon them.

“There is a great willingness to move forward. Now, we will have to see if what is promised can be turned into practice.”

EELV predicts its best results yet as France heads to ballot

Party spokesman Alain Coulombel says polls in February were indicating EELV would have the best results yet: “Six years ago, the polls thought we would have 5-6% of votes. This year, they are predicting around 20%.

“There is even a possibility of an EELV mayor in Lyon.

“The public have seen the fires in Australia, melting glaciers in the Alps, summer temperatures in February. They want change.

“Our policies are different to other parties because we have a coherent manifesto drawn up with years of experience. We want to go all the way. We want 100% organic food in canteens, rather than 20%.

“When President Macron was in Haute-Savoie, he talked about the disastrous reduction in the Mer de Glace and the need to do more for climate change. But the government has approved a new motorway, which is nonsensical when we have to reduce, not encourage, car use.

“We need a new economic model and must reduce consumerism.

“Local councils have more green policies, which we welcome, but at the same time they give planning permission for environmentally catastrophic new hypermarkets.

“Anne Hidalgo is one of the greenest candidates, but supports the Paris Olympics, another green disaster.”