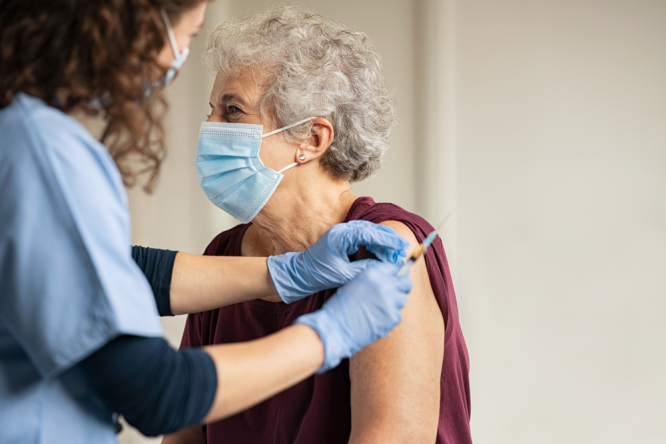 A new study found a marked drop in the number of antibodies present in fully vaccinated patients aged over 80 Pic: Rido / Shutterstock

The head of the association of rural mayors of France has called on Prime Minister Jean Castex to make vaccination against Covid-19 mandatory for everyone in France.

Michel Fournier, mayor of Les Voivres, Vosges, made the request in a video call with the prime minister yesterday.

The prime minister is holding talks with elected officials and political leaders in advance of introducing new health rules to counter the spread of the Delta variant.

It is already likely that mandatory vaccination will be introduced for healthcare workers in hospitals and elderly care homes.

Mr Fournier said that if this was the case, it should also be made mandatory for firefighters, teachers and all workers that come into contact with the public.

But his preferred solution was that vaccines be made “obligatory for everyone, with no restrictions”.

He told the HuffPost: “There comes a moment in life when you have to know how to make a decision. People who are against vaccination and believe unlikely things are also against the fact that we have health passes.

“We have not yet measured the economic consequences of the closures that we have been living with for more than a year.”

But the mayor of the 330-person town said that the prime minister was too “sensitive to party politics” to follow his advice.

“Senior politicians often only think of the next elections,” he said.

Over 35million people have now received a first dose of the vaccine in France, and over 26million are fully vaccinated.

This includes around 64% of staff in elderly care homes and hospitals who have received a first injection, figures from Santé publique France show.

This comes as a new study shows that older patients are still at higher risk of being infected with Covid-19, even if they are fully vaccinated.

It found that the number of antibodies present in patients decreased according to their age, with a marked drop in people over 80.

The results showed that people in their 90s did not have enough antibodies to avoid infection with the virus.

This comes as new variants have also called the efficacy of vaccines into question.

Studies from the UK, Canada and Israel have had differing results when measuring the level of protection offered after two doses of the Pfizer vaccine, finding it gave between 64-88% protection against preventing infection.

Meanwhile, a recent article from Institut Pasteur in France stated that people who were not vaccinated played a “disproportionate” role in spreading the virus to others, and were 12 times more likely to do so.

This has increased calls for younger people in France to continue getting vaccinated in order to protect themselves, and older generations.

the latest figures show vaccination rates for different age groups in France are: