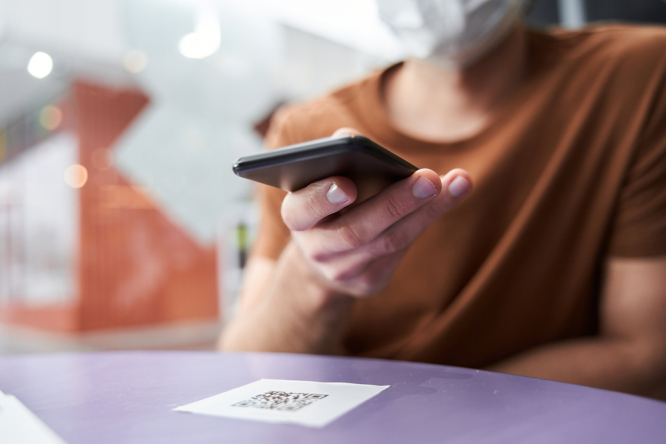 Restaurants will be reminded to display QR codes so customers eating inside can officially check in Pic: Olena Yakobchuk / Shutterstock

As cases of the Delta variant rise in France, the government is planning new health measures to try to combat a potential fourth wave of the virus.

On Monday, July 5, President Emmanuel Macron held a meeting with key ministers (the Conseil de défense sanitaire) to discuss possible new rules, amid claims that they could create a gulf between people who have been vaccinated and those who have not.

Health Minister Olivier Véran said recently: “20% of people who don’t get vaccinated cannot constrain the 80% of people in France from accessing daily activities that they have missed so much for over a year.”

We explain what could change.

Extending use of health passes

Health passes show proof that the bearer has a negative test result taken in the previous 48 hours, has been fully vaccinated or has had Covid-19 and is considered immune.

Currently, passes are necessary in order to access events with over 1,000 attendees inside or outside.

From July 9, they will also be needed to go to nightclubs.

However, experts are calling for their use to be extended further. Head of the French vaccine campaign Professor Alain Fischer told Le Monde the idea of health passes being used “to go to the cinema, the theatre or a restaurant doesn’t shock me”.

“It is a good idea, especially for young people.”

The end of free PCR tests for ‘personal convenience’

Medical advisory body to the government l’Academie nationale de medicine suggested at the end of June that people in France should no longer be offered free PCR tests if they do not have Covid-19 symptoms and are taking the test for reasons such as going on holiday overseas.

The government is considering this idea, especially as it could encourage more people to get vaccinated for free, instead of relying on tests.

But some experts have spoken out against this, especially as cases of the Delta variant increase as it could make people less likely to get tested overall.

François Blanchotte, president of the national union of biologists, told BFMTV: “A fourth wave could begin if we do not manage to get control of the virus. It is very important… that we continue testing.”

The Delta variant is spreading at different rates in different regions of France.

In three regions over 50% of cases are linked to the Delta variant: Ile-de-France, Nouvelle Aquitaine and Provence-Alpes-Côte d’Azur.

In the areas most likely to experience high tourist traffic over summer, rules could be reintroduced to help stop the spread of the virus such as wearing masks outside.

In Landes, Nouvelle Aquitaine, one of the departments worst-affected by the Delta variant, some confinement measures have never been lifted and are expected to stay in place until July 21.

New rules on international travel may also be introduced.

Minister for European Affairs Clément Beaune has already advised people in France who have not yet booked a summer holiday to avoid travel to Spain and Portugal as the health situation is “worrying” in both countries.

Stronger measures to enforce the message may come soon.

For some days it has been suggested that Covid vaccines will become mandatory for staff working in care homes for the elderly and hospitals.

On July 7, Health Minister Olivier Véran and leaders from health organisations released a joint statement saying they were in favour of the move, which will be voted on in parliament.

Professor Fischer said the law should be voted in “as soon as possible”, on the grounds that health workers have a responsibility to not harm people in their care.

Being vaccinated makes people significantly less likely to catch and transmit the virus to others.

The professor said: “We can no longer accept clusters [or cases] being added to by health professionals who have contaminated their patients.

Increased use of QR code tracers in restaurants

In order to facilitate track-and-trace efforts, restaurants in France are supposed to ask guests who sit inside to scan a QR code as they enter, or take their contact details manually.

But last week only 1.5million QR codes were scanned in total, and some restaurants are reportedly not displaying the codes or asking customers to use them.

The Economy Ministry has issued a reminder to unions to encourage restaurants to use the codes, and a campaign to raise awareness is also planned.