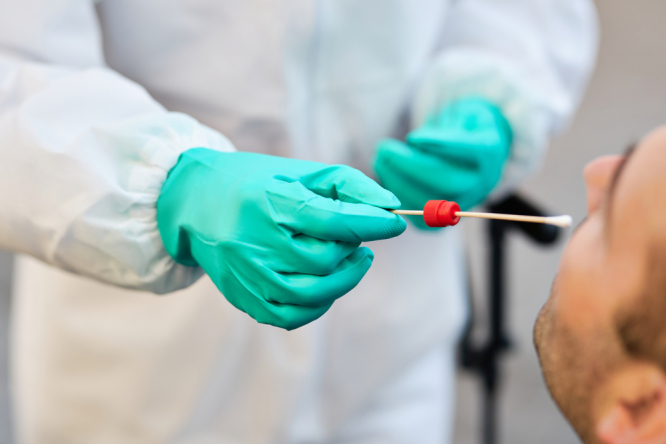 Cases of the Delta variant are identified by screening PCR tests which show a positive result Pic: Drazen Zigic / Shutterstock

The Delta variant now accounts for over 50% of Covid cases in three regions in France: Ile-de-France, Nouvelle Aquitaine and Provence-Alpes-Côte d’Azur.

In cities, the variant has been identified at rates of 30-60%, the latest figures from Santé publique France (SPF) show.

Nationally, L452R (the main strain of the Delta variant in France) has been identified in 39.7% of all positive cases screened for the variant between June 26 and July 2.

These figures are limited, as only 51% of all positive test results were screened for the variant in this time frame.

But they do give an indication of how rapidly the variant may be spreading; 2% of screened tests contained the variant by June 6, this went up to 7% by June 16 and 20% by June 26.

Epidemiologist and member of the Conseil Scientifique, Professor Arnaud Fontanet, said that the variant could account for 80-90% of new cases by the end of August.

Health Minister Olivier Véran said the spread of the variant could cause a fourth wave of the epidemic in France as soon as the end of July.

More comprehensive data on precisely how many Delta cases there are in France should be available in coming weeks Director of l’Assurance maladie, Thomas Fatôme, told Le Figaro.

He said: “We have told laboratories that we will no longer pay for PCR tests if they are not being screened [for variants] from mid-July.”

Cases rising, but reservations for first vaccines increasing too

This comes as SPF figures from July 6 show that the number of daily cases (not just the percentage of the Delta variant within new cases) is going up.

The rate of positivity (meaning the percentage of tests that come back positive) has gone up from 0.8% to 0.9% in the past week.

Hospitalisations due to Covid-19 have not been affected by the increase in cases so far.

After fears that the vaccine campaign in France was stalling, the government has also reported a 40% increase in people making appointments to get a first vaccine this week.

The health minister described the increase as “a quiver rather than a somersault, but in the right direction”.

Authorities hope that 40million people in France (equivalent to three quarters of the adult population) will have received a first dose by the end of August.

Figures from July 6 show that almost 35million people have received a first vaccine, and almost 25million are fully vaccinated so far.

France allows holidaymakers to get second Covid jab while away

France to charge foreign tourists for Covid-19 tests from tomorrow