France allows holidaymakers to get second Covid jab while away 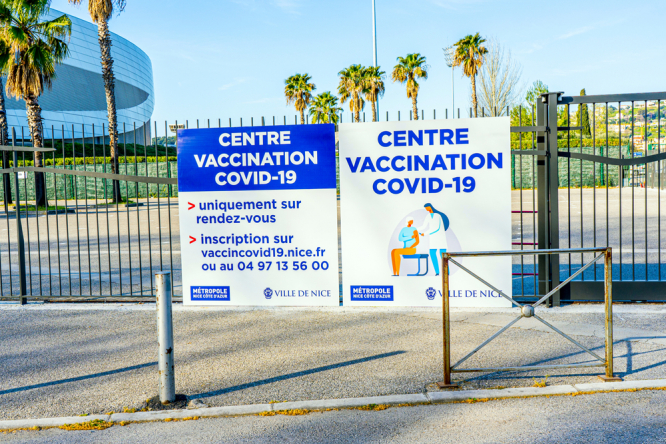 Vaccination centres in coastal and tourist areas will prepare to enable more people to book their jabs while on holiday to avoid vaccination delays Pic: elinaxx1v / Shutterstock

Holidaymakers in France can now have their second Covid-19 vaccine jab while they are away in a U-turn on previous government policy, as the Delta variant spreads and ministers urge rapid vaccination.

The government had also allowed people to receive their second jab sooner than before - between 21 and 49 days - to encourage people not to delay their appointments due to holidays.

But Health Minister Olivier Véran confirmed on Friday (July 2) that the public can now book vaccination appointments in two different places, including in holiday destinations.

Sylvie Quenet, public health director in charge of vaccinations at the Agence régionale de santé (ARS) Nouvelle Aquitaine, told FranceInfo: “It is now wholly possible to book an appointment in one location for the first dose, and another location for the second dose.

She reminded the public that the gap between doses is now permitted to be “between 21 and 49 days, which will enable everyone to find an appointment that suits them”.

Vaccination centres along the coast, from Charente-Maritime to Pyrénées-Atlantiques, will be ready to welcome holidaymakers to appointments, Ms Quenet confirmed.

She said: “There will be a rise in the number of doses available in centres, as well as by other professionals: pharmacists, nurses, doctors, midwives. There will be targeted action with temporary centres, kiosks in very touristy areas, and mobile vaccination buses along the length of the coast.”

The latest figures show that around 25% of new daily Covid cases are now of the Delta variant, and Mr Véran said that there is a “potential threat of an epidemic resumption as early as this summer”.

Delaying vaccination ‘could cause fourth wave’

It comes as Professor Alain Fischer, head of the government’s vaccination campaign, has warned that people who are delaying their vaccinations are “committing an error”, and could contribute to a possible fourth wave of the virus.

Speaking to le Journal du Dimanche, he said: “Those who are delaying [their jab] are committing an error. If you get vaccinated today, you are protected for the rentrée [September].

“Everything is to play for in the next two weeks, in order to avoid a fourth wave linked to Delta, and to the resumption of contacts, schools going back, and a more favourable climate for the virus.”

Professor Fischer reminded people that they are not properly protected against the virus after a single injection (for vaccines that require at least two jabs).

The professor explained that it is most difficult to convince younger people to get vaccinated quickly.

He said: “The battle is more difficult for the 18-40-year-olds: predictions suggest that they will be 60-70% vaccinated at the most, versus 45% today. These projected levels are not enough to control the virus and achieve herd immunity.

“There will still be infections, hospitalisations, intensive care admissions, and deaths. And potentially material restrictions; schools closures, another lockdown…”

In the same interview, Professor Fischer reiterated that he was in favour of mandatory vaccination for healthcare staff and care home workers.

He said: “For these professionals, we are reaching the last resort. There is less than 60% coverage in elderly care home, 64% in hospitals, it is clearly not enough.”