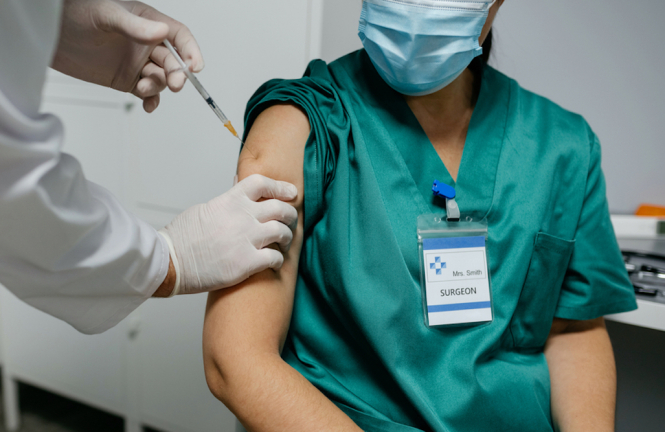 In order to stop the spread of the epidemic vaccination may be made mandatory for healthcare workers this summer Pic: David Pereiras / Shutterstock

A fourth wave of the Covid-19 epidemic could begin in France as early as the end of July due to rising cases of the Delta variant, Health Minister Olivier Véran said yesterday (July 4).

Mr Véran wrote in a tweet: “For the past five days circulation of the virus has not declined, it has increased due to the highly contagious Delta variant.

“The situation in the UK shows that a fourth wave is possible as early as the end of July.

“We can limit this, and limit the impact on health services with barrier gestures, vaccines, and test/alert/protect measures.”

Figures from Covidtracker show that there has been a 9% increase in the number of positive daily tests in the past week, with the average number of daily positive cases now at 2,043.

Speaking to the press at summer festival Solidays, the health minister said it was “a race against the clock” to get as many people vaccinated as soon as possible to curb the spread of the variant.

Getting vaccinated reduces the risk of developing serious forms of the virus, even for people who catch the Delta variant. Vaccinated people are also less likely to catch or infect others with Covid-19.

The health minister said: “We don’t want a fourth wave and today we have the possibility of avoiding it. Each week that we gain is a week that the potential epidemic loses.”

Health workers could get mandatory vaccines this summer

This comes as Prime Minister Jean Castex will start discussions this week with MPs and local officials over making Covid-19 vaccinations mandatory for care workers.

Almost 100 high-profile doctors said they supported the move in an open letter in le Journal du Dimanche on July 3.

The 96 doctors called for mandatory vaccination for staff in hospitals and elderly care homes to happen before September in order to avoid a fourth wave, during which unvaccinated healthcare workers could “expose the people they are looking after to the risk of contamination”.

Read more: MPs to debate obligatory Covid vaccination in France - but for whom?

Mr Amouroux told FranceInfo: “A health worker who is against vaccination is in the wrong job.

“For health workers, it’s in our DNA to trust science and get vaccinated to protect people who are more vulnerable.”

He said that getting vaccinated was an ethical and moral responsibility for carers, in order to avoid harming people in their care.

The health minister has previously said he would like these figures to rise to 80% by September.

Healthcare workers in France must already be vaccinated against diphtheria, tetanus, hepatitis B and polio.

Meanwhile in Le Touquet, Pas-de-Calais, mask-wearing in outside spaces has become mandatory again.

The mairie made the decision in light of the spread of the Delta variant and the number of tourists visiting the seaside town.

Mayor Daniel Fasquelle told FranceInfo: “It’s a measure that will be in place for the whole summer. With the new variant and the rising cases in France we cannot take our foot off the gas.

“We have already lived through one pleasant summer with masks; the two things can coexist.”