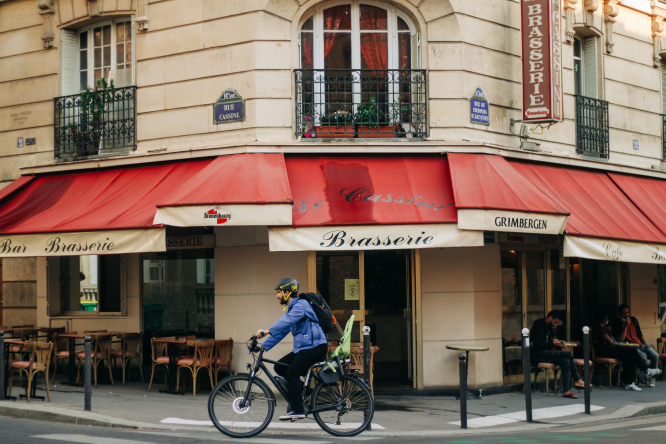 The project will help to connect existing bike lanes and make them easier for cyclists to navigate Pic: @iameddiejr / Eddie Junior / Unsplash

The Ile-de-France region is to spend €300million developing 680km of new cycle lanes that will connect outer suburbs to the centre of Paris.

The project, called RER Vélo, was planned by the Vélo Ile-de-France collective in 2019.

A map for the project showing the nine new routes plotted as if they are lines on the RER train map has been released. The routes have been specifically planned to be easy to follow for cyclists.

The five routes highlighted in colour are priority lanes, which should be ready for use by 2025. The remaining grey lines are expected to be completed by 2030.

Some sections of the route may be ready for use before then. Initial work is expected to be authorised this summer and could start by the end of 2021, with the first usable lanes ready in 2022.

Vincent Degove, associate coordinator of RER V and member of cycling association Paris en Selle, told Le Figaro: “The first phase could be ready in 2024, and the whole project by 2027-8. The objective is that by the Olympic Games in 2024, most of it is already complete.”

Increase in cyclists since lockdown

The project will be co-funded by the Ile-de-France region, and cycling collectives. Ile-de-France has given €300 million in funds, amounting to 50% of the total cost.

Collectives will then manage the project locally.

Mr Degove said a dramatic increase in cycling in Paris since spring 2020 helped increase political support for the project.

The number of cyclists using cycle lanes in the capital rose by 67% between the end of the first lockdown due to the health crisis and August 2020, compared with the same period in 2019, the collective Vélo and territoires reported.

Mr Degove said: “The collectives were more convinced than before. They understood that, in the long term, there would be an increasingly significant demand for cycling infrastructure.”

Grégoire de Lasteyrie, representative for new transport in Ile-de-France said the RER V project would send a “strong signal” to inhabitants in the region that cycling is a viable alternative to public transport.

Despite increasing popularity, journeys by bike only account for 3% of all travel in Ile-de-France. This may be due to existing cycle lanes being difficult to navigate.

A 2019 survey by the Institut Paris Region studied 5,835 kilometres of cycle lanes in Ile-de-France. It found that, of roads with cycle lanes, 60% had specific areas cordoned off for cyclists, while 40% encouraged cyclists to share space with other forms of traffic or pedestrians.

The goal for the RER V is to connect stretches of cycle lanes and give the whole network a consistent look that makes it easy for cyclists to navigate.

Mr Degove said: “The only way to encourage more bike use in Ile-de-France is to resolve the problem of unconnected bike lanes, so that cyclists feel safe throughout their whole journey.”

Valeo electric car motors to be used to power e-bikes

1 day ago
3
Britons in France: Five groups 'at risk' of missing card deadline