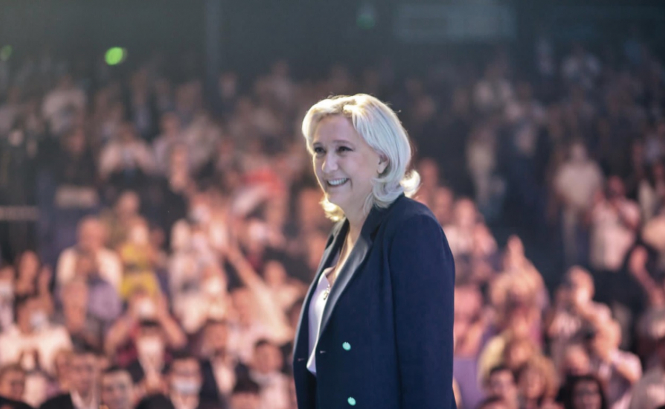 Marine Le Pen has been reelected as head of far-right party le Rassemblement National with more than 98% of the members’ vote, and called on the party to “seek victory” in the 2022 presidential election.

The result, announced on Sunday, July 4, was not a surprise; Ms Le Pen has been the leader of the party since 2011. She won the election with 98.35% of the vote, and was the only candidate.

The remaining voters either abstained or voted ‘blank’.

The party founded by her father, Jean-Marie Le Pen, was previously known as le Front National. Ms Le Pen renamed it in 2018, in line with what she said were new goals.

Political analyst and sociologist, Erwan Lecoeur, told FranceInfo: “Rassemblement National, like le Front National, is first and foremost a ‘Le Pen-ism’ It is about the Le Pen family, the father, and then the daughter.

“There is no internal competition that could eventually overthrow it, and this is, in a way, the only real vulnerability in the party.”

At the party’s conference in Perpignan, Pyrénées-Orientales, Ms Le Pen said: “We are not going backwards. With all the respect that we have for our own history, we will not go back to the Front National.

“We have been able to move beyond political immaturity that is not compatible with our national ambitions, and give our movement the necessary qualities of a government party.

“We must not close down, but continue to be open to all political, associative and civil society forces, and to all of the French people, who do not want to remain as spectators.”

Ms Le Pen is set to temporarily vacate her role as party head in autumn, to focus on her presidential election campaign.

She will be replaced by ‘interim president’, 25-year-old Jordan Bardella, who was voted ‘premier vice-president’ of the party in the same leadership election in Perpignan.

Mayor of Perpignan Louis Aliot, and mayor of Hénin-Beaumont, Steeve Briois, were both voted in as vice-presidents.

Ms Le Pen said her aim was to “set in motion a nationally unified government around a project of civil peace” and to be the candidate of “concrete solutions”.

She said: “No happiness is possible if the country fades away or worse, collapses.”

She reiterated that as president, she would organise a referendum on immigration, in a bid to "abolish family reunification [among immigrants], to reform the right to land, and the welcoming of so-called ‘minor' isolated foreigners”, she said.

Ms Le Pen did not refer to her recent setbacks when speaking at the party conference, including poor results in regional and departmental elections.