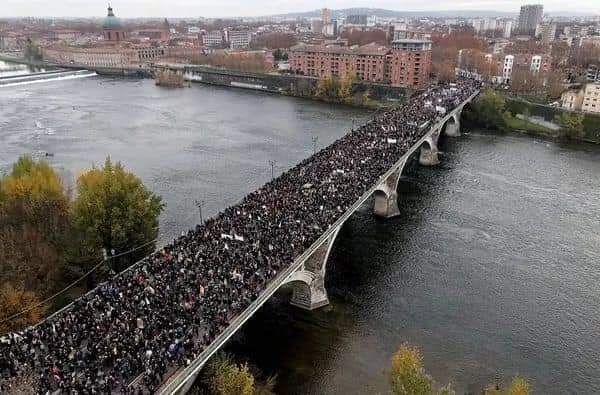 Huge crowds came out for the strike across France, including in Toulouse (pictured), and an estimated 300,000 in Paris
By Connexion journalist

According to the minister for the interior, 806,000 people came out to join the movement yesterday, of which 500,000 were in cities and towns outside of Paris. Yet, major union the CGT puts the number at 1.5 million.

It is common for there to be a significant difference between the numbers of protesters calculated by the government and by the protesters themselves, as this article explains.

Some marches erupted in violent clashes, prompting some protesters to say they were “disappointed”, because “now the newspapers will only focus on that”, rather than the main strike grievances over widespread pension reform.

Police said that 71 arrests were made in Paris, with more violence reported in cities including Nantes, Bordeaux and Rennes.

Union the CGT has said that it was pleased with the turnout yesterday, and that it is now awaiting a rapid response from the government.

She added that the strike could continue “if there is no response”, and put forward “conditions” for the protests to stop, including "withdrawing the reform project from Macron-Delevoye, and then, opening up negotiations so that we can have improvements within the current system”.

She said: "We do not wish to prolong the strike for days and days, including the workers who have come out. I am especially thinking of the [train and tram workers] the cheminots and traminots. They do not want to lose their working days for weeks.

"If [the government] wants to stop the strike quickly, they must talk fast, and not wait for three or four days."

Some strikers said they were “ready to continue the strike” until the Christmas holidays.

One protester from workers’ union the FO, Gérard Brunot, told news source FranceInfo: “We will see that this movement has done, and how the government responds this weekend, and we will see what happens next on Monday.”

Some protesters have said that they will continue to strike for as long as necessary. One marcher, speaking to FranceInfo, said: "I just remember that in 1995 [the last major pensions strike], the movement against pension reform lasted 23 days. We have nothing without sacrifice."

The strike is continuing in force today (December 6), and is still affecting many sectors across the country, including train and bus transport links, schools, and airlines.