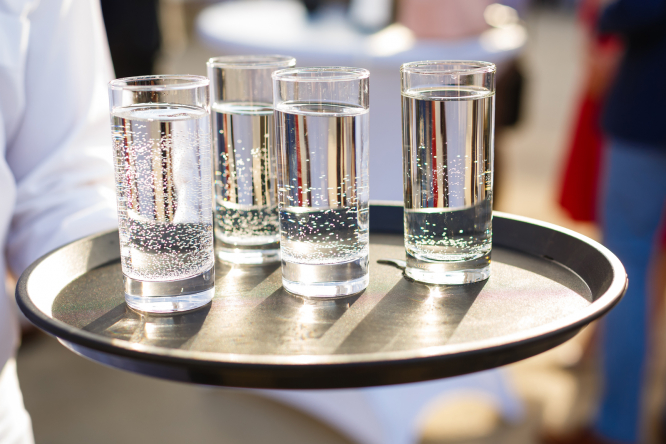 McDonald’s in France has replaced bottled Evian water on its menus with an offer of fresh water from a drinking fountain, costing €1.75 for a 25cl glass or €2.30 for 50cl.

The fountain offers paying customers still, sparkling or flavoured Eau de McDo (Water by McDonald’s) with the chain saying it is a move towards reducing the use of plastic in its French restaurants.

In March 2021, the company announced it would stop selling drinks in plastic bottles in France - but the price for a glass of tap water has shocked customers and officials.

In contrast, McDonald’s is charging €7 per litre of water in its restaurants, he said, a 2,000% markup.

In response, the restaurant chain said that the charge covered the “investment” in its restaurants in order to install the drinking fountain system, which provides “micro-filtered” water “purified at 99.99%”.

Critics have pointed out that McDonald’s is purifying French tap water that has already been treated, so it is safe for drinking, and is recognised as being good quality throughout France.

Can a restaurant in France legally charge customers for tap water?

Others have questioned the legality of charging for tap water, which is often provided for free by restaurants, cafes and bars.

But restaurants only have an obligation to provide free water in some circumstances.

A 1967 law stipulates that “ordinary water” should be included in the final cost of a meal for free, along with bread and cutlery.

And a 2020 law states that restaurants should “indicate in a visible way on the menu or a sign that customers can ask for free drinking water”.

However, the rules are different for cafes and bars that do not serve food.

Here, a customer ordering a coffee can legally be charged for a glass of water, as long as the price is clearly indicated on signs and menus.

In the same way, cafes and restaurants that serve food have the right to charge customers for water if they do not eat but order a coffee instead, for example.

This means that McDonald’s should still offer customers who eat in its restaurants “ordinary water”, as defined by the 1967 law, for free.

It is likely that the fast-food chain is able to charge for its Eau de McDo on the grounds that it has been processed and flavoured by the company.

How many people drink tap water as compared to bottled in France?

Tap water is safe to drink across the vast majority of France, but figures show that 75% of the population drinks both tap water and bottled.

This makes France one of the largest consumers of bottled water in Europe, with more than seven billion bottles sold every year.

A study cited by FranceInfo found that eight in 10 people believe that bottled water is better for health than tap water.

The top brands for still water in France are Cristaline, Vittel, Volvic, Evian, and Hépar, La Croix has reported.

Sparkling water (eau gazeuse or pétillante) is also popular, and in many restaurants, if you do not specify ‘eau plate’, you are likely to be served a sparkling bottle from one of the main French brands, such as Perrier, Badoit, Saint-Yorre, and La Salvetat.

Different brands make different assertions about the mineral content of their water, with the brand Taillefine claiming to help you lose weight; and some specifically saying they are ideal for use in babies’ bottles.

If ordering water in France, and you want to specify the kind from the tap, ask for a ‘carafe d’eau’ rather than a ‘bouteille’. Usually, this will be free, if ordered with food.

How does the price of water compare within Europe?

French costs for tap water compare relatively well with the rest of Europe, as neither the most expensive, nor the cheapest.