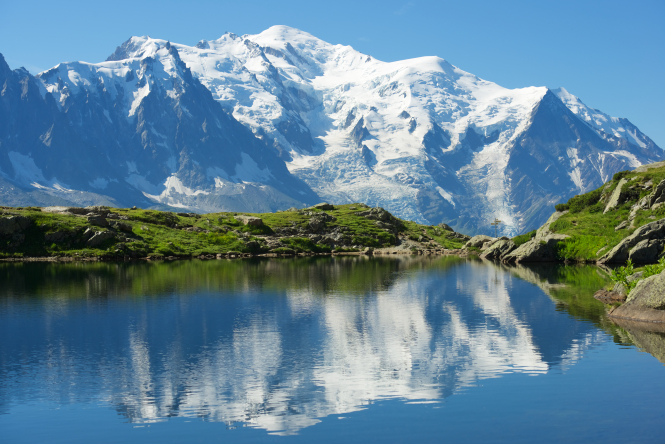 The summit of the mountain made up of around 15 metres of snow and ice Pic: pedrosala / Shutterstock

Mont Blanc has lost three metres in height since 2010, researchers report, after measurements from September 2021 show it is now 4,807.81 metres tall.

The mountain, which is the tallest in Europe, was measured by land surveyors during a three-day mission, which has taken place every two years since 2001.

During the mission, experts used satellite sensors to model the ice cap that sits at the top of the mountain.

This enables them to “create a precise and reliable data bank to be used by experts and passed onto future generations,” two experts from this year’s mission said in a press conference.

The latest measurement is very close to the ‘official’ height of the mountain, which is known as 4,809m.

This measure dates back to the end of the 19th century but, in reality, the height of the mountain changes continuously, the experts said.

In contrast, the 2019 measurement (4,806.03 metres) was so “exceptionally low” that it was not made public, with researchers preferring to wait for the 2021 figures for “more scientific explanations”.

On average the height of the mountain has decreased by 13 centimetres per year since 2001, due to changes in the ice and snow at the top.

Meanwhile the summit of the actual rocky peak is at 4,792 metres and increases by up to three millimetres per year due to shifting tectonic plates.

Why does the height change?

The height fluctuates due to the fact that the summit is made up of around 15 metres of snow and ice, the exact height of which changes in volume according to the weather

Some years, heavy precipitation and weak winds mean that more snow accumulates at the top, making the summit taller.

As such, the mountain is at its tallest at the end of summer while in winter, stronger winds clear more snow reducing the overall height.

Land surveyor Jean des Garets told France 3 that tthe researchers “removed the most recent snowfall at the summit, going down about 40 or 50 centimetres [to] measure the highest point of the ice below” when making their calculations.

He said that the 2021 figure had reached a “level of precision never seen until now”, as good weather conditions on the day of the expedition meant that researchers could stay at the summit for three hours.

Experts said that the impact of climate change on the mountain was difficult to measure, and warned against “making hasty conclusions based on data that only goes back to 2001”.

16 facts about the ‘white mountain’