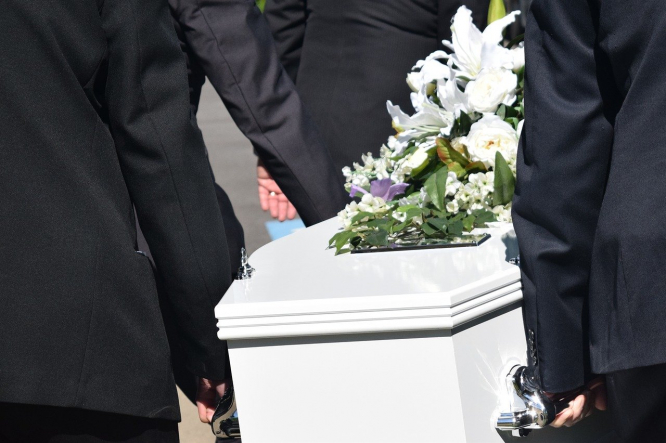 Nine cases of the virus have been confirmed in the small village of Eglise-Neuve-de-Vergt (Nouvelle-Aquitaine), making it the 29th “cluster” of cases in the department overall.

The new infections occurred after the funeral of someone “in their fifties”, whose death “had nothing to do” with the virus, said Michel Laforcade, director of local health authority l'Agence Régionale de Santé (ARS) de Nouvelle-Aquitaine in a press conference.

Local newspaper Sud Ouest said that “around 20 members of the family were present” in a small church in the village, as has been permitted under confinement, but that they may “have been more numerous at the funeral home, the cemetery and the family meeting [afterwards]”.

But one member of the family told newspaper France Bleu Périgord that the family had respected confinement rules throughout. She said: “There were 20 of us in the church, all wearing gloves and masks. At the funeral home, there were not more of us. At the cemetery, there were perhaps 30 people. But inside, it was only close family.”

Frédéric Perissat, Dordogne prefect, said: “This is the perfect example of what we do not want. A relaxing of the rules, a grouping of 20 or 30 people where one person infects the others.”

How was the ‘cluster’ identified?

A few days after the funeral, one member of the family - who had been present at the burial - reported Covid-19 symptoms, and was tested. This test - ordered by the ARS - came back positive on April 30.

Of the 103 results that have come back so far, nine tests were positive for the virus. Of these, eight were from the close family, and one works as an employee at the same company as one of the infected people.

Seven of the nine had symptoms, and two did not. However, ARS director Mr Laforcade said that “there has been no serious form of the virus so far, and no hospitalisations”.

Mr Laforcade explained that the cluster had been quickly identified and limited as soon as possible, with all possible contacts of the first positive patient having been contacted and tested quickly.

He said: “This is what we have been doing for around two months, especially when we see a possible or confirmed ‘cluster’ situation. [The ARS asked] if they thought they could have been in contact, what they had done over the past few days, and who they had come into contact with.”

The ARS added: “We worked in concentric circles, which expand.”

This started with people in the “close family circle”, who were tested and immediately isolated. The funeral home staff, who organised the burial and event, were tested next.

Then the “at-home hospital workers” who had been looking after the deceased person’s wife - who had herself had Covid-19 and had been receiving care at home - were tested.

Then, workers at the company of the first person to be tested, were themselves tested.

Mr Laforcade said: “So far, all of the people who we invited to be tested, have been.”

Each of these people has now been placed in isolation, pending full results. More tests will be undertaken next week to be certain the virus has not spread further.

The ARS said: “Twelve people who have already been tested will be again [on Thursday, May 15], because contact with the last positive person was only seven days ago.”

The situation is now “under control”, the ARS said.

This new cluster comes as another small group of cases is confirmed among staff of a collège (middle school) in the same region.
Four director staff members at the Gérard-Philipe collège in Chauvigny (Vienne, Nouvelle-Aquitaine) have been confirmed as testing positive, said the ARS.

Under the new deconfinement rules, most collèges are set to reopen their doors to sixième and cinquième students on May 18, but Gérard-Philipe has now delayed its reopening to May 27 after a decision from Chauvigny mayor Gérard Herbert. The school is also set to be disinfected in the meantime.

Regional newspaper La Nouvelle République said that one member of staff had tested positive initially, with the number later confirmed to have risen to four.

Nine people in total, who had been helping prepare the collège for reopening, have now “been placed in immediate quarantine”, the ARS said.

Mr Herbert said that the delayed reopening would only take place if all school workers in the town were also tested, a request to which the ARS has now agreed. Tests were done by le Laboratoire Bio 86 on Saturday (May 9) with the results expected on Monday (May 11).

He said: “This situation in Chauvigny makes me think that we will have more problems [after confinement]."