Why new France lockdown could last ‘beyond December 1’ 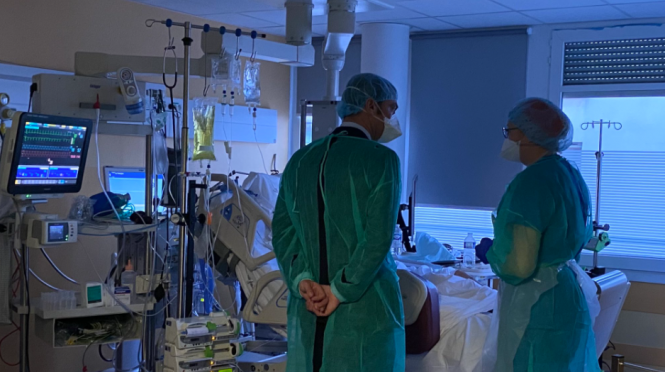 The new confinement measures in France may need to last beyond the stated current date of December 1 if the number of cases per day does not decrease as projected, government scientific advisors have warned.

The French government has stated that its aim with the new confinement - which came into force from midnight on October 30 - is to see new cases of Covid-19 drop from 40,000 to 5,000 per day, by December 1.

Yet, high-profile government scientific advisors from le Conseil Scientifique have said this is unlikely, and recommended that based on this metric, the lockdown will probably need to be extended.

Health Minister Olivier Véran told news service FranceInfo that the lockdown could last more than a month, and that the first evaluation of the situation would take place in two weeks.

He said: “[We will look] to see if we need to make extra decisions, if the situation is worsening.”

But president of government scientific advisory body le Conseil Scientifique Professor Jean-François Delfraissy told news source France Inter: “On December 1, we will not be at 5,000 contaminations per day, I can tell you that now. We will need more time.”

Indicators of the virus are currently still worsening across France, with experts declaring this second wave to be “worse than the first”.

Professor Delfraissy said: “We are in a less positive situation than we were at the beginning of March. Contamination is spreading across the country, and not only in certain regions.”

People who have not been tested, or those who are infected but asymptomatic, are not included in the official case totals, which likely means the virus is spreading even more than calculated.

Mr Véran said: “[There are] probably around one million people who are spreaders of the virus [without knowing]. We cannot exclude the fact that the virus is continuing to spread. We cannot rule out a third wave behind this one.

“The virus is doubling every 10-14 days. Yesterday we had 36% more cases than the same day last week.”

The second lockdown is less restrictive than the first, as crèches, schools, collèges and lycées are all remaining open, as are parks, factories, and public workplaces for those who cannot work from home.

Similarly, epidemiologist Dr. Pascal Crépey told news site 20 Minutes: “The right thing to do is for everyone to consider everyone else as though they are a vulnerable person, or infected: by taking the most precautions possible and respecting barrier methods at all times.”

As of October 31, there were 2,507 new admissions to intensive care, and 16,865 more people hospitalised due to Covid-19 in the past seven days.

According to a report seen by the French cabinet, and published by Les Echos, Covid-19 patients could require up to 40,000 hospital beds and more than 9,000 intensive care beds by mid-November.

This is far above the normal hospital capacity, which was at 5,080 beds before the pandemic, and is set to reach 7,000 soon, according to Mr Véran.

But Philippe Amouyel, a public health specialist at the CHU in Lille, has predicted that the new lockdown is likely to significantly reduce the number of people being admitted to intensive care.

He said: “During the first wave, we saw that after three weeks of confinement, the curve started to flatten with a 40% drop in the intensive care admissions each week.”

But Dr Piarroux added: “The context is not the same today. Many non-Covid patients still need care. We do not have the same margin of manoeuvre as we did in spring.”

Some experts have said that the second wave could be worse than the first largely because respiratory viruses often spread faster in winter.

Mr Véran said: “In April, it was dry and warm. But the autumn months are humid, heavy, cold. These are climate conditions that are favourable to spreading the virus.”

As early as July, le Conseil Scientifique was warning that a second, weather related, wave was likely in autumn.

A report from July reads: “Coronaviruses such as SARS-Cov-2 have seasonal behaviour, with reduced transmission during the summer season.”

Director general of health, Jérôme Salomon, reminded the Assemblée Nationale that “there are still many unknowns when it comes to this virus”, and said that the weather had “profoundly changed” since the first wave.

‘Christmas will not be normal this year’

As the country grapples with the second wave, Mr Véran has also warned that Christmas “will not be a normal holiday this year”, and that while the government is “trying to create the conditions to make Christmas as restriction-free as possible”, it is “still difficult to imagine [us] holding big parties” for Christmas and New Year.

He said: “Our aim is to enable the epidemic pressure to drop so that we can shop in time, prepare joyfully, and create the conditions so that families can get together.”

To this end, the health minister called on people to respect the lockdown rules.

He said: “The number of cases could drop within days, and within two weeks, we could see a real drop in the number of severe cases. The more people respect [confinement], the shorter it is likely to be.”

According to the most recent figures from health authority Sante publique France (October 31), there were:

France lockdown: What is open and what is not?