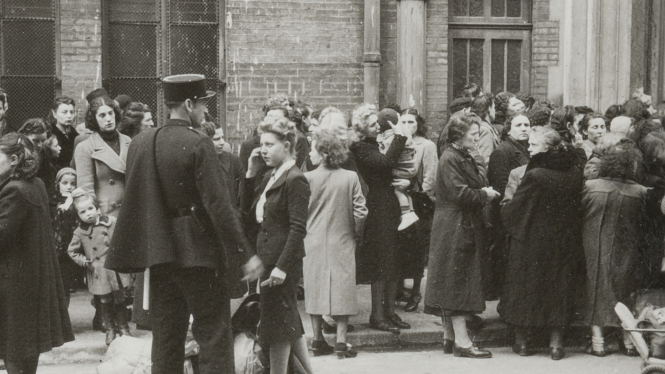 Outside the Gymnase Japy, where Jewish men were rounded up before being deported to prison camps. Their families wait outside anxiously. Pic: Le Mémorial de la Shoah

Newly discovered photos documenting the first mass arrest of Jewish people in France during World War Two shed new light on the historic event, showing the emotions of the victims.

The photos document what is known as the Rafle du Billet Vert (Green Ticket Roundup).

On May 14, 1941, some 3,700 Czech and Polish Jews in and around Paris responded to a summons in the form of a green ticket and went to police stations to have their statuses verified.

On arriving, they were immediately arrested and sent to prison camps in France. From there, the majority were shipped to Auschwitz where they were killed.

Now, the Mémorial de la Shoah, a Holocaust museum in Paris, has acquired a series of photos from two specialist collectors showing this event.

The 98 images were captured by a German soldier and show a never-before-seen reality of the Rafle du Billet Vert, in which French police rounded up Jewish foreigners living in Paris.

You can see more of the photos on the Mémorial de la Shoah website here.

“For the first time, the scene of the arrest is immortalised from several angles, as well as the people involved,”  the Mémorial de la Shoah wrote about the photos.

“Previously dehumanised by propaganda, or even totally erased from the news reports, the families of those rounded up are captured in emotional farewells, under the eyes of onlookers and neighbours.

“Above all, this discovery, which is essential to history and remembrance, allows us to follow the path taken by these rounded-up men, from their arrival at the Gymnase Japy in Paris, to their internment in the camps [in France].”

The photos capture the thousands of Jewish men crammed into the Gymnase Japy, a large hall. There are also images of their family waiting anxiously outside the hall.

One photo shows what appears to be an emotional and hurried last kiss between a woman and a Jewish man who is about to be taken away.

France was captured and occupied by Nazi Germany during World War Two and divided in two, with the Occupied zone governed directly by Germany and the rest, the so-called Zone libre, administered by the Vichy government under Marshall Philippe Pétain.

The Rafle du Billet Vert was the first mass round-up of Jewish people in France, but not the only one.

The Vel’ d’Hiv’ round-up occurred just over one year later, when over 13,000 Jewish people, including 4,000 children, were arrested. They were held at the Vélodrome d'Hiver in Paris in deplorable conditions before being sent to Auschwitz.

In 1995, President Jacques Chirac apologised for the role French police and civil servants played in the event.

In 2017, President Emmanuel Macron admitted that the French state at the time was complicit in the round-up.

An exhibition showcasing the newly discovered photos of the Rafle du Billet Vert is currently on display outside the Gymnase Japy in Paris.

They will later be displayed at the Mémorial de la Shoah.

5 days ago
5
Tax cuts in France: Where have residents benefitted the most?