Alpes-Maritimes: Driving licences seized for using phone at the wheel 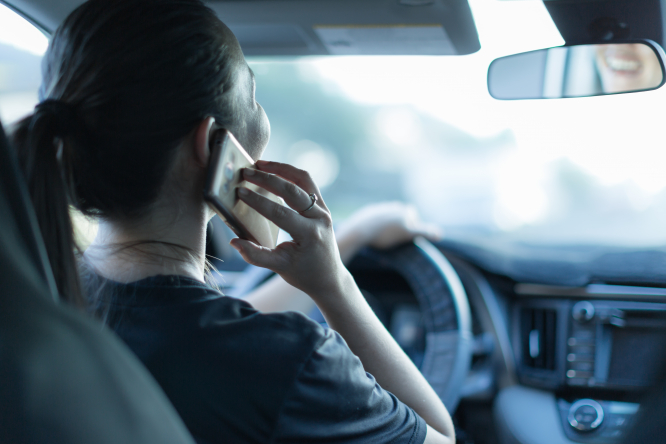 Drivers found to be using their phones behind the wheel can now have their licences confiscated if they are also committing another offence. Pic: christinarosepix / Shutterstock

A new French road safety law against using mobile phones behind the wheel had its first outing near Nice last week when gendarmes took away five licences on the spot.

Before the Loi d’orientation des mobilités was introduced, people using their phone while driving faced a €135 fine and at least three points on their licence.

Now, they will also have their licence confiscated for up to six months if they are found to have their phone in their hand while they commit another offence such as speeding or driving on the wrong side of the road.

The new law was passed in December 2019 but only came into force this summer. It is thought the Nice operation is the first time it has been systematically applied.

This month, gendarmes from Alpes-Maritimes carried out a traffic control operation which involved a search for people using their telephones at the wheel.

They quickly identified five culprits who fell under the scope of the new law.

The drivers had their licences confiscated for a minimum of one month.

After the operation, the gendarmes said the worst case involved a French lorry driver on a notoriously dangerous curve of the A8 main road who was driving at 80km in a 50km zone, tailgating the traffic in front of him, and overtaking on the right.

He was caught by the gendarmes with his telephone in his hand, but said he thought it was permitted because he was not using it to make a call but to watch a video.

The culmination of offences meant he was banned from driving for six months.

Other drivers using telephones were seen and fined for refusing a right of way, jumping traffic lights and overtaking without using indicators.

The standard fine for holding a telephone while driving is a fine of €135 and the loss of three points.

This includes telephones used to make calls through ear-phone sets while driving and earphones linked to helmet mics and earphones. Only fully integrated hands free sets or helmet and mic sets are allowed to be used while driving.

Under a 2018 ruling from France’s highest court, the Cour de cassation, fines also apply to drivers who stop to take calls, unless they are parked in a recognised parking space.

Estimates from the French Interior Ministry suggest that people using telephones are responsible for 10% of road accidents.

It states that research has shown that using a telephone while driving increases the risk of an accident by three, while reading a message on the screen increases the risk by 23, because people take their eyes off the road for an average of five seconds to do so.