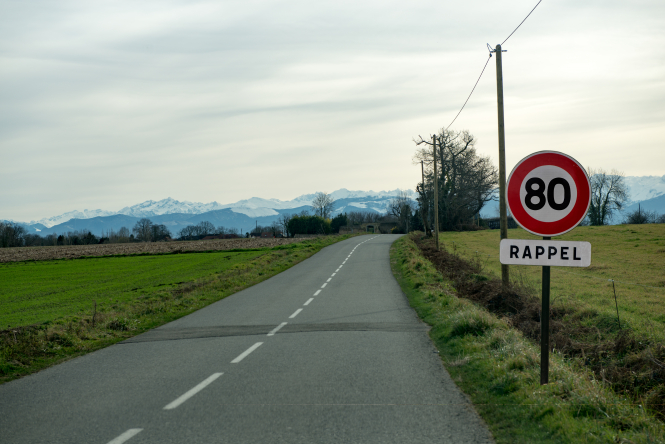 The speed limit was officially reduced in June 2018 after a trial of the lower limit on roads prone to accidents. The change applied to secondary roads, except dual carriageways and motorways.

Following the trial, the government said that “349 lives were saved during 20 months” due to reduced speeds.

But spokesperson for la Ligue de Défense des Conducteurs Alexandra Legendre has questioned this figure after leading a study that investigated all road deaths in France before and after the speed limit change.

The study used data on road deaths and accidents available from the national observatory for road safety (Observatoire national interministériel de la sécurité routière), and compared numbers before and after the 80km/h speed limit was introduced.

It found that in 49% of departments in mainland France and 47% in overseas territories, the number of deaths was “stagnant” from one year to another.

Ms Legendre wrote in an open letter in Capital that the objective of the study was to show that the figures quoted by the government were “biased”, as the data it used included roads with speed limits of 70-110km/h, not just 80km/h.

In addition, the government’s figures included accidents that were unrelated to speed limits, such as a 2017 crash between a school bus and a regional train in the Pyrénées-Orientales in which six people died.

Ms Legendre cited another incident that led to three deaths in 2017 in Oise, in which a driver without a licence who had been drinking was driving her family at 35km/h in a car with broken back lights on an unlit road.

The vehicle was first hit by a car that fled the scene, and then hit again by another vehicle, the driver of which had been smoking cannabis.

Ms Legendre said that all deaths in the government figures were falsely attributed to speed, and failed to factor in other potential contributors to road deaths such as alcohol and drug consumption, telephone usage, vehicle condition, and road lighting.

In this context Ms Legendre described government figures as “misleading and false”.

Which departments have set the limit back at 90km/h?

After the speed limit was changed, a number of departments opposed the measure.

In December 2019, local authorities were handed authority to revert back to the 90km/h if they chose, under the loi d’orientation des mobilités, which came into force on December 24, 2019.

By July of this year, 33 departments of 101 in total in France had decided to raise the limit back to 90km/h.

This means that on some departmental roads across department borders, some parts of the roads have a limit of 80km/h, and some 90.

Departmental road safety agency la Commission départementale de la Sécurité Routière has stipulated that departments wishing to go back to 90km/h must evaluate the possible risks of doing so, and improve the roads by installing safety features such as central reservations.

It comes as Paris residents, driver associations and shop keepers have filed an appeal with the Administrative Court of Paris two weeks after Mayor Anne Hidalgo lowered the speed limit city-wide to just 30km/h, except on some major roads.

Ms Hidalgo said that lowering the speed limit would reduce traffic accidents, noise and pollution; and smooth out relations between road users.

But a lawyer for the group that is bringing the appeal, Patrick Tabet, said that reducing speeds would not have a significant effect on road safety or accident levels.

This is because it is only “the fifth leading cause of traffic accidents in Paris, behind driving under the influence of drugs, drink, failing to give way and dangerous overtaking”, he said.

What leniency is there for speeding in France?

Each road must clearly display its speed limit on signs at the side of the road, including any changes.

Article updated September 20 to clarify rules on leeway for speeding