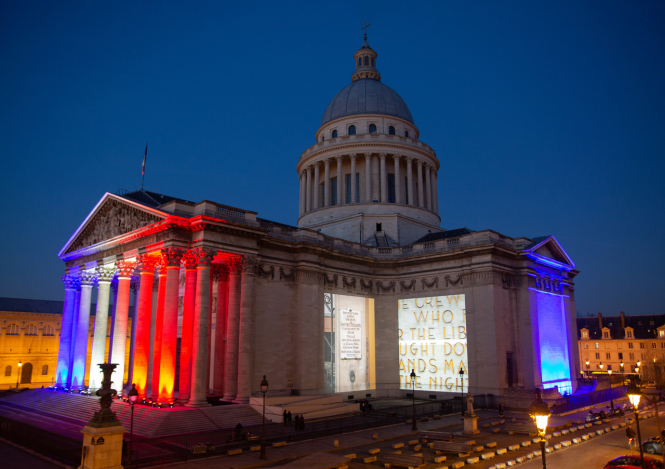 Tests have taken place for an art installation on the walls of the Pantheon to commemorate the 'ordinary people' who liberated France from the Nazis in World War Two.

The light show was originally planned for May, but has been postponed due to Covid-19 health restrictions, and will now take place on September 16, 17 and 18 from 20:00 to midnight.

A team of young photographers has tracked down more than 1,500 memorial plaques from 1939-1945, marking the war and the liberation of Paris, at places where fighters died or were executed, where the Resistance was born, and where battles were fought and won.

They were helped in their research by the director of the Allied Forces Heritage Group in Paris, Ian Reed, after the British Council put Mr Apeloig in touch.

Mr Reed said said: “It started as a conceptual project which grew. Now it is something exciting, to help remember before memories fade.”

The Allied Forces Heritage Group is made up of historians, academics, professionals, researchers and supporters from a wide variety of disciplines and organisations which uses their experience and knowledge to help promote the commemoration of the allied services.

The images will be laser projected on to the Pantheon’s outside walls.

This is the first time the plaques have been catalogued and listed together.

Project leader, graphic designer and typographer Philippe Apeloig, said that they remember “ordinary people, who did not do anything out of the ordinary except give their lives for their country".