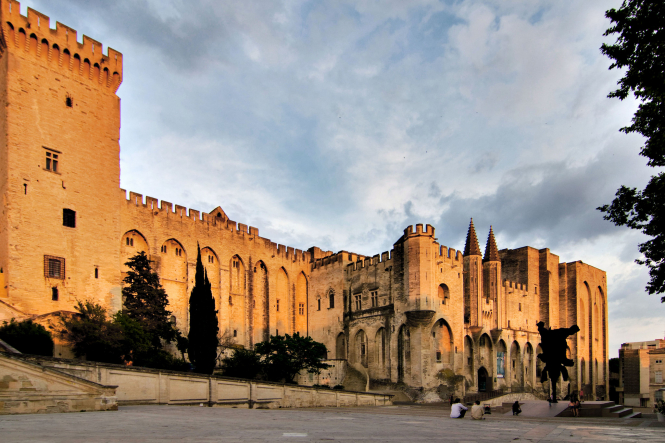 The 'pesticide-free' city of Avignon, in the south of France, is set to begin reaping the rewards of its organic approach with the first harvest of honey from hives more than 40m above the ground at the Palais des Papes.

Six hives were installed in April at the top of the tour Saint-Laurent - and keepers expect to collect high-quality honey in September.

Thierry Azzolin, a beekeeper from Eyguières who is in charge of the tower's apiary, said the success of the hives was because city gardeners do not spray green spaces and gardens.

"We are in a city without pesticides for green spaces," he told France Bleu Vaucluse. "There are many trees and flowering gardens or balconies. Finally there is water - the Rhone is right next door.

"Bees in the city are doing better today than in the countryside. The only concern here was the mistral, which is why we weighted the hives to fix them to the ground. Then they were placed well against the rampart line of the tower, sheltered from the wind but also in the shade for the heat."

He said the bee population in each hive was growing, meaning that the bees have adapted well to their upper-storey home, and they were still producing larvae as recently as this week, which meant that there is still plenty of pollen.

Since spring, a webcam installed on the tower has made it possible to follow the lives of the bees from one of the six hives.

Next year, in the new garden of the Palais des Papes, a chimney hive will be installed. It will be accessible to the public and numerous educational activities are planned.