Petition against ‘half empty’ food packaging sold in France 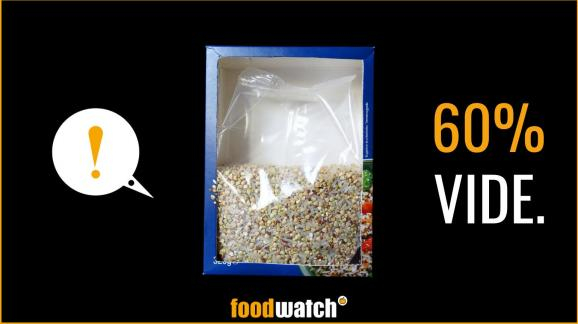 Some packages of food may be 50-60% empty, Foodwatch said, as it launched the petition
By Hannah Thompson

NGO Foodwatch, which specialises in highlighting food fraud, has today (Thursday September 17) started a campaign against “under measured” packages that are “full of nothing”, in products sold in supermarkets in France. The group is fighting against the dual issue of "half-empty" bags, and therefore excess packaging.

Its goal is to get the brands to “reduce the use and size of the packaging of their products to a strict minimum”, and ensure that the “marketing” of what is inside the pack matches up to the “reality”.

Some products, it said - for example, of seeds, rice or spices - are sold with their inner bags empty by as much as 50-60%.

Foodwatch said: “There are examples of disproportionately large packaging in most shelves, including brands that pride themselves on beautiful ecological principles.”

Camille Dorioz, campaign manager at Foodwatch, said: “After complaints from several consumers, we went to check supermarkets and compared products between them. Almost all the shelves were affected by this excess packaging and these products sold ‘full of emptiness’.

“Offering useless packaging is not illegal, but it’s time to end these abusive practices.”

The NGO cited Monoprix as one major example, saying that their packaging was designed so that a big label stuck on a spice product hid the fact that it was sold 35% empty. “[Monoprix] seems to sell a product that is cheaper by the unit than its competitors, but in reality, the distributor is offering a smaller quantity, which actually works out much more expensive, It’s a real scam.”

The new petition and campaign are intended to “put pressure” on these seven companies, with the group also sending company directors an email about the issue every day - with an update on how the petition is going. At the end of the campaign, the final petition will be sent to each director.

At the time of writing, the petition has 1,616 signatures. It can be signed online on the Foodwatch website.