Pianos to return to French train stations with 50-player concert 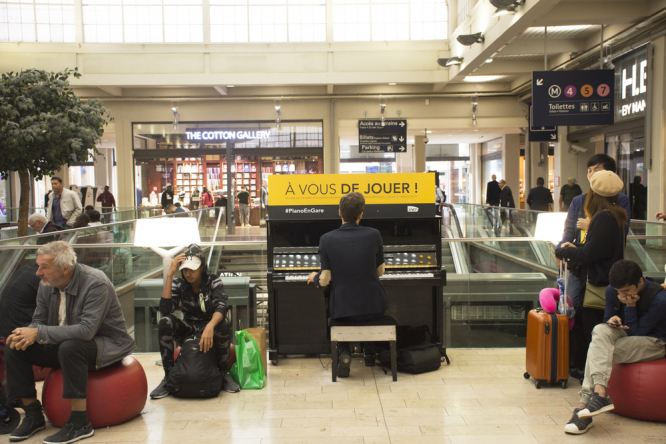 Pianos first made an appearance in public train stations in France in 2010, and there are now 70 Yamaha models across France Pic: Anirut Thailand / Shutterstock

Pianos are to return to train stations in France from July 1, with SNCF set to hold a special concert across 50 stations to celebrate their musical comeback after the pandemic.

The return of the instruments – which are conspicuously placed and available for members of the public to play – was confirmed this week by Marlène Dolveck, director-general of SNCF Gares & Connexion, speaking on Europe 1.

When the pandemic began, train authority SNCF banned people from playing the pianos – and even removed the instruments from many stations completely – due to hygiene concerns.

Now, even after the pianos are reinstalled, hygiene measures will still be in place, with physical distancing still encouraged, and alcohol sanitiser gel available next to each piano. Players will have to disinfect their hands before and after use.

The instruments’ return will be celebrated with a simultaneous concert across 50 stations in France.

Ms Dolveck explained: “On July 1, there will be a concert at the same time, with 50 artists in 50 stations, who will all play the same piece.

“It’s a huge joy for us. We really missed this during the crisis.”

Composer André Manoukian will sponsor the event, and has helped organise its coordination. The piece to be played is still a secret, said Ms Dolveck.

Pianos first made an appearance in public train stations in France in 2010. There are now 70 Yamaha models across France.

Some found them enjoyable, especially when a talented pianist took a turn; but others, including shopkeepers inside stations, said that they added to the general noise and confusion of public spaces.

In other train station news, SNCF also said that it was making all station toilets free for public use for all passengers who have a train ticket, from 2022.

Ms Dolveck said: “Those who want to use the toilet and who are local residents will pay €1. For those who have a train ticket, it will be free.”