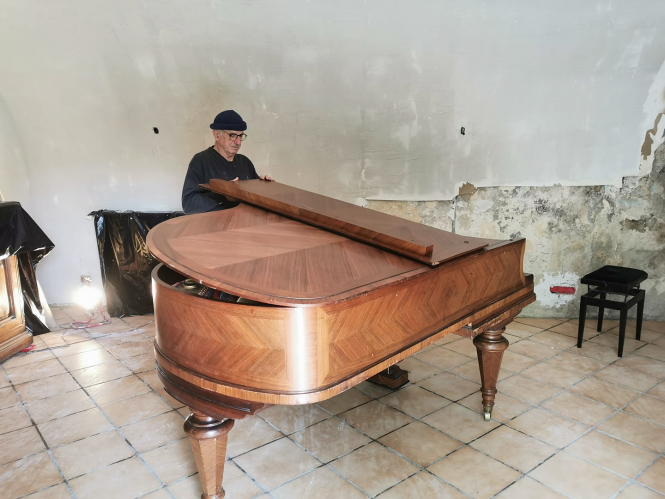 A charity organisation has gifted a new piano to a French pensioner whose much-loved one dating from 1930 was damaged by Storm Alex last October and had to be destroyed.

Samuel Maman’s home in Saint-Dalmas-de-Tende (Alpes-Maritimes) was one of hundreds of homes in the south-east of France to be ravaged by flood waters during the storm.

His piano was so badly damaged that it had to be destroyed.

But he now has a new one, thanks to charity organisation Les Week-Ends Solidaires, which was created to help victims of Storm Alex and organised the delivery of the new piano.

They organised the delivery of the piano, which was donated for free by PianO du Lac, a company that organises “floating” piano concerts on lakes.

Mr Maman said that the gift brought him much joy.

“It’s perfect. I feel a lot of emotion,” he told French news outlets the day the piano was delivered.

Mr Maman got his new piano on May 22, some seven months after the devastating storm.

Les Week-Ends Solidaires even arranged for concert pianist Philippe Villa to inaugurate the new piano with a short recital at Mr Maman’s home.

At least 10 people in France died due to the storm, nine of them in the Alpes-Maritimes, and eight people are still unaccounted for.

music
charity
storm
More from Your News
More from Connexion

Are we allowed to leave our caravan parked on our land in France?
2 June 2021
More from Your News
More from Connexion
Get news, views and information from France
Join the newsletter
Subscribe to The Connexion