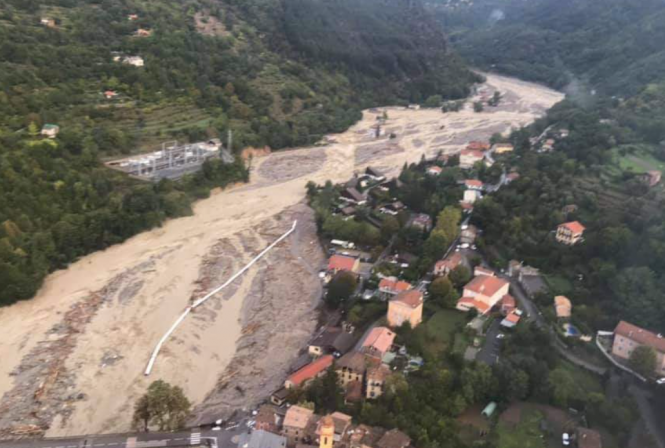 Aerial photos from the villages in Alpes-Maritimes show mudslides and devastation after Storm Alex hit.
By Hannah Thompson

In Alpes-Maritimes, the villages of Saint-Martin-Vésubie, Roquebillière, Breil-sur-Roya, and Tende are among some of the worst-affected, after almost a year’s worth of rain fell in 10 hours overnight from Saturday 3 to Sunday 4 October, causing mudslides and devastating flooding.

More than 560 residents have been evacuated by emergency services, with 150 people yet to be rescued.

Photos and videos from the aftermath show rivers of mud, houses being washed away, trees being uprooted, and cars left almost completely covered with mud and debris.

One person - a cyclist - was confirmed dead in Brittany as Storm Alex hit the West coast on Friday.

In Roquebillière, two elderly residents in their eighties - Josette and Léopold Borello - are believed to have died after their house was swept away by the rising water, with them still inside.

They are thought to have barricaded themselves in their living room, and had been trying to signal to emergency services using a lamp.

The village mayor, Gérard Manfredi, said that the couple had ignored previous calls to evacuate while they still had a chance to escape. He said: “We tried to convince them that they needed to go, to leave their house, several times. Nothing doing, they didn’t want to know.”

As conditions became too dangerous for emergency services to attempt rescue, the couple’s house eventually crumbled, and was carried away with the pair still inside.

Local reporter Grégory Leclerc posted a video of their house minutes before it was swept away, calling the incident a “catastrophe”.

The couple’s son, Eric Borello, told local newspaper Nice Matin: “My parents are missing, but I know that it’s over. I knew that when I received confirmation that they were in the house until the final moment. They went after a long life of love. That is what I’m telling myself to ease my pain.”

Mr Borello said he had been in phone contact with his parents every 15 minutes on Friday (October 2), who told him that the situation was “catastrophic” and that water was rising. He heard people from the mayor’s office calling on them to “get out, get out”, and they told their son that they would gather some things and go to the neighbour’s house. But they appear not to have done so.

From his flat in Nice, Mr Borello called emergency services, who told him that no helicopters would be able to fly in the conditions to mount a rescue.

He said: “When I hung up, I knew it was over...they weren’t suicidal. They just took too long to evaluate the situation and get their things ready. They probably wanted to save some papers. The weather killed them.”

The couple had already suffered during a severe flood in 1994, the mayor said. He added: “They listened to us then [when asked to evacuate], and came back to find their house totally devastated...they did not want to live through that again.”

Bridges and houses swept away

Another video by reporter Mr Leclerc shows another house being carried away and smashed by the fast-moving water, reportedly with no-one inside, according to locals.

Near Breil-sur-Roya, a 2,000-inhabitant village on the French-Italian border, four bridges were destroyed by the water, and emergency services are still assessing the extent of the damage in the valley.

Mayor Sébastien Olharan said: “[The] population is running low on everything: water, electricity, food. We would never have imagined that such a flood could come to our village.”

Yesterday (Sunday October 4), he said that there were still “more than a dozen people” who he had not heard from, and that the “human toll was more than we can count”.

One road - the Bruis mountain pass - has since reopened. Lieutenant-colonel Nicolas Franck, part of the team working to help support the villages affected, told news service BMFTV: “The first necessity is to establish a proper diagnosis of the situation in the valley, who are the missing people, the houses swept away, and assuage people’s doubt on who is inside these houses.”

One resident, Christine, who was evacuated after the storm, told BFMTV: “It was like a sea around my house, with floating bits of wood. When you see that, you really panic.” Another resident said: “There was mud in the courtyard that was like sand, and very difficult to clear.”

Another said: [We have] no light, no electricity, no internet, no phone...do you understand what that means? We are cut off from the world.”

Weather forecasters confirmed that 500mm of rain fell in under 10 hours - a record for the region.

Prime Minister Jean Castex has already said he will have the incident declared as an official “catastrophe naturelle (natural disaster)”.

President Emmanuel Macron has tweeted in support of those affected and thanked emergency services for their work.

Locally, Alpes-Maritimes MP Eric Ciotti has estimated the cost of the damage to be in the region of €1billion, while Charles-Ange Ginésy, president of the Alpes-Maritimes department council, said: “I am afraid, effectively, that the total cost will continue to rise as we investigate [conditions] on the ground.”