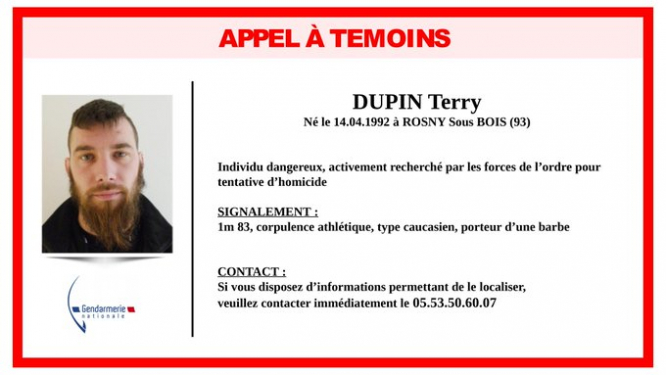 Police have issued a photograph and description of a 'heavily armed' former soldier who has been hiding out in a forested area in the Dordogne after a domestic incident at the weekend turned violent.

The massive police hunt for Terry Dupin, who reportedly fired a rifle at officers responding to reports of a domestic violence incident, is continuing in southwest France.

Officers have urged residents of the Dordogne village of Lardin-Saint-Lazare to remain in their homes for a second day and avoid travelling on local roads as the search continues. The local school has been closed, and school buses cancelled.

A police spokesman said the local lockdown will remain in place 'for as long as it takes' to keep local people safe.

Two investigations have been opened in connection with the incident - one for violence to an ex-spouse and attempted homicide of her current partner. The second for "attempted homicide on a person holding public authority" after police attending the scene came under fire.

Police believe Dupin is hiding out in a heavily wooded area nearby that is about four square kilometres and that they say he knows well.

Elite tactical units and around 300 gendarmes backed up by seven armoured vehicles, seven helicopters and sniffer dogs are searching the area. But they said the manhunt could take 'many more hours'.

He added: "Contact had been established (with the gunman) several times... but was followed by gunfire. Each time we have made contact with him, he's opened fire."

"We are doing everything we can to get him to surrender but we also want to avoid a tragedy within our ranks."

Police have said that they want to bring the suspect in alive. "If we wanted to neutralise him we would have already done it," a spokesman said.

He is believed to be armed with an illegally obtained Winchester 30-30 hunting rifle, which is typically used in the region to hunt boar.

Police were called to his ex-partner's home in the 1,800-population village at around midnight on Saturday, after the suspect allegedly threatened her current partner. Officers said that he fired on them before fleeing into the woods when they arrived.