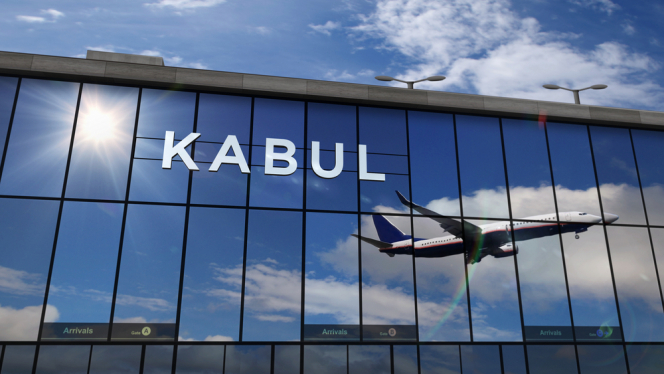 Evacuations from Kabul airport are being organised Pic: shutterstock.com / Skorzewiak

President Macron is to speak  tonight on French television and radio about the situation in Afghanistan after Taliban forces took over the capital Kabul yesterday.

It comes as the French air force has been mobilised to help with the evacuation of French citizens from the country.

A  defence council of the president and key ministers is being held today at midday before President Macron’s speech to be broadcast at 20:00 on TF1, France 2, M6, BFM TV, CNews, LCI and FranceInfo.

France was involved in the conflict in Afghanistan militarily from 2001 to the end of 2012, as an ally of the US in the invasion when the Taliban were driven from power in a bid to deny Islamic militants al Qaeda the chance to use the country as a base, and then in an ongoing security role. Some troops stayed on until 2014 in logistics roles.

There were some 4,000 French soldiers in the country at the height of operations; 89 were killed and 700 injured.

The French government reports in a statement from Foreign Affairs Minister Jean-Yves Le Drian that “faced with the extremely rapid degradation of the security situation” the French have relocated their embassy in the country to Kabul airport, so as to be as close as possible to help those seeking to flee by air.

Two air force transport planes have taken off for the United Arab Emirates where they will be involved in helping with emergency transport runs between Abu Dhabi and Kabul.

France’s top priority is to help get out any remaining French citizens and a French crisis centre on site is in contact with those French people who have made themselves known to the embassy, Mr Le Drian said.

The statement added that “France has not forgotten those who have worked for her,” stating that plans have been in place since May to help Afghans who worked for French organisations in the country and who are now in danger, to seek asylum in France with their families – over 600 people are concerned so far.

This comes on top of operations since 2013 to help some 1,350 Afghans and family members who used to work for the French military in the country, for example as interpreters.

A first round trip is expected by the planes today and people will be transported from Abu Dhabi to France.

Army Minister Florence Parly told FranceInfo today: “There are still dozens of French people there and notably diplomatic personnel who helped with delivering visas, but also employees of NGOs and associations.”

The Elysee has stated that “the immediate priority in the next hours is the safety of French people as well as personnel on the ground, both French and Afghans.”

The Foreign Affairs Ministry has said France has been “one of the rare countries” to have maintained in the country “the capacity to protect Afghans who have worked for the French army, as well as journalists, human rights activists, artists and Afghan personalities who are particularly under threat”.

It is aiming to maintain the possibility for those eligible to obtain visas for France at the embassy at the airport, it says.

France has also since last month ceased expulsions of Afghan migrants in France whose asylum applications have been turned down.

Several French politicians from across the political spectrum have spoken out about the situation in Afghanistan which has seen the extremist Taliban sweeping back into power in cities across the countries with the final withdrawals of US troops.

Far-left politician Jean-Luc Mélenchon tweeted : “I applauded the US defeat in Vietnam; I am disgusted by their defeat in Afghanistan. It’s time to think things through before getting into wars that cannot go anywhere. Because if the war doesn’t resolve anything, defeat changes everything. We should think about it with regard to Mali.”

Far-right leader Marine Le Pen predicted a new caliphate in Afghanistan “putting our people and the world’s safety in danger”.

Meanwhile Socialist Party leader Olivier Faure compared those fleeing the Taliban to those who fled the Nazi regime.

Les Républicains MP Eric Ciotti has urged France to use “all diplomatic, financial and political leverage” possible to avoid “abandoning Afghanistan to the hands of torturers”.

In an opinion piece in news magazine Le Point Michel Colomès writes that French journalist and novelist Joseph Kessel already warned of the hopelessness of military action in Afghanistan as long ago as 1967.

Kessel had recalled the 1842 massacre of British troops and civilians they were trying to protect, as they attempted to flee to British-ruled India after leaving Kabul, which the UK had attempted and failed to take.

“From Genghis Khan to the British, the Pashtuns have never accepted and never will accept any foreign domination,” Kessel wrote. “Those tempted to risk it should remember the Battle of Khyber Pass.”