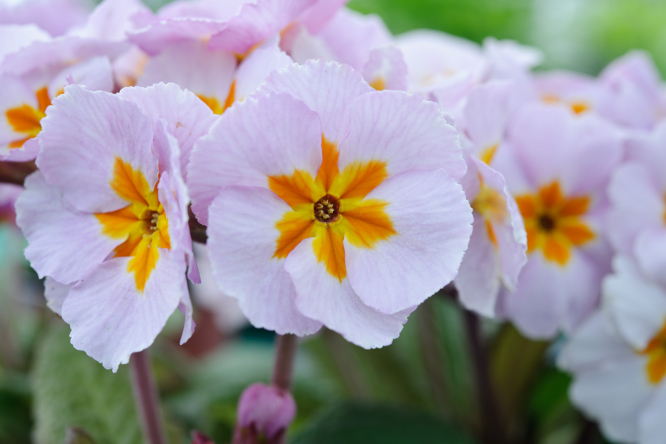 Barnhaven primrose nursery, Primevères de Barnhaven, is helping make primulas a hit with French gardeners as some flower from February to July.

The nursery, run by Jodie and Rob Mitchell, has a history dating back to 1936 in the US, and Mrs Mitchell said there was a primula to suit every garden.

“They are easy to grow from seed and with patience you will have flowers the following year. They grow in most soils with a good helping of organic matter, but prefer it slightly acidic, and can stand cold to -20C but don’t like the heat.”

Primula is the name of the family with species such as primrose, auricula and polyanthus. Auriculas are the alpine cousins of our wild primroses and are more showy flowers which grow well in pots, while the polyanthus are on longer stems.

Mrs Mitchell said they keep old varieties alive by hand pollinating plants and create new ones the same way: “Visitors are amazed our flowers aren’t all yellow. But people are beginning to appreciate the enormous variety and it seems that primulas are fashionable.”

Barnhaven Primroses’ story starts in 1936 when American woman Florence Bellis bought a few packets of Sutton’s primrose seeds she had seen in the English catalogue of a friend.

She had no previous experience but her seeds grew and within a couple of years she had more than a thousand plants in her garden which people came to see and she began to sell.

She developed her range and when she retired in 1966 she sent her seed stock to some faithful customers in Brigsteer, Cumbria, England with a simple message: “Yours – to keep or kill”.

They took on the challenge and developed the collection. When they retired they asked a local woman to take it on and she and her husband decided to move to France and set up business in Plouzélambre in Brittany, which has an ideal climate for primulas. The first seeds were sown in March 1990.

In 2000 the business was passed on to another British couple in the village, Lynne and David Lawson. They moved to a site a few kilometres away at Plestin-les-Grèves and it is now their daughter, Jodie Mitchell and husband Rob who run the business.

All the Barnhaven polyanthus date back directly to the first five seed packets bought by Florence Bellis and are direct descendants from those seeds.