Processionary caterpillars are on the move 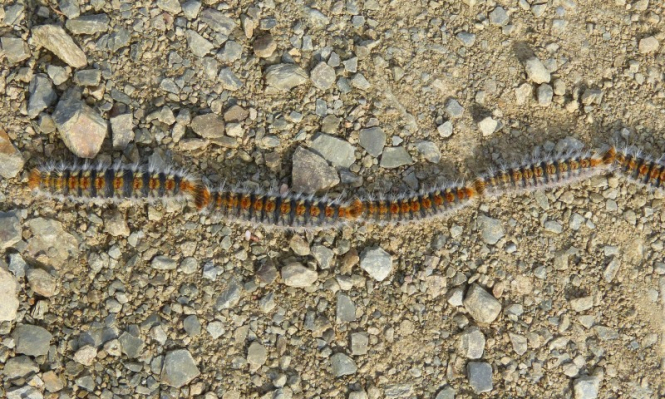 Lines of caterpillars have started to appear over the past couple of weeks but do not touch them as their hairs can cause severe skin irritations.

Since 2011 air-sprayed chemicals have been banned and, since the beginning of this year, it is illegal to spray chemical pesticides on them.

Natural predators such as great tit, coaltit and great spotted cuckoo will happily munch hundreds in a day and foresters in the south of France set up nesting boxes in affected areas. Last year eco-traps containing pheromones were set up to catch the caterpillars in the Calanques national park.

Gardeners can attract more coaltits to their gardens with a bird table containing black sunflower seeds, sunflower hearts and, occasionally, suet. Great tits like the same, but also peanuts.

Research institute INRA also suggests another method, suitable for gardens, to fit a track trap with a collar round the bottom of the tree and a hole leading to a plastic bag. This ‘éco-piège’ can then be burned.

Although previously restricted to the south of France, global warming has seen the caterpillars spread north to Paris and beyond. Feeding on the needles of pine trees, they can severely defoliate trees and make them more susceptible to pest or disease attack.

Nests can be spotted in winter as rugby ball shaped cotton wool-like masses on branches on pine trees and can contain hundreds of caterpillars and larvae. Avoid touching the nests.

In warming weather, caterpillars leave the nest and proceed down the tree to the soil where they march in long lines to find soft, dry earth to burrow underground.

But as they move their hairs fall off and children, dogs or other animals in contact with the soil can receive severe skin irritations and, if dogs swallow them, can die as their throat swells up.

The simplest way to get rid of them is to destroy the nest if the caterpillars are still inside – but this is best left to experts. Contact your mairie for advice and it may suggest a pest control firm.

Wearing overalls, they will cut down the branch and burn it in a bid to destroy all hairs that may have fallen off. Most chemical controls have been banned as they kill all insects and a biological control can also harm bees.

A French entomologist, Jean Henri Fabre, conducted a well-known study early last century where he made a line of caterpillars attach to the back of itself… they continued marching for a week.