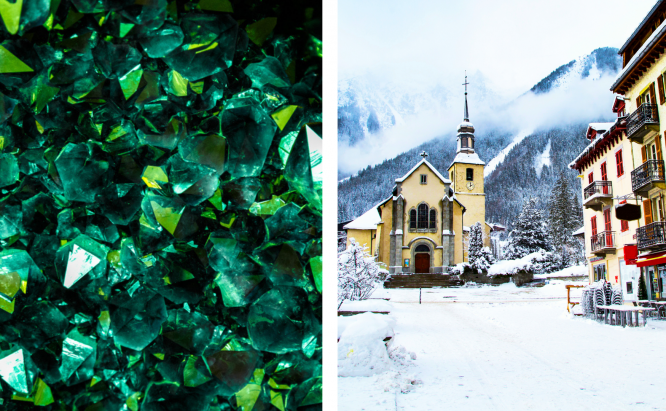 The gemstones have been shared between their finder and the town of Chamonix, the latter of which is set to show them in its new museum Pic: Gilmanshin / Nataliya Nazarova / Shutterstock

A treasure trove of precious gemstones worth an estimated €300,000, discovered in the Mont-Blanc mountain range in 2013, has been shared between its finder and the town of Chamonix.

Mayor of Chamonix, Eric Fournier, confirmed to AFP that the “stones have been shared this week” equally, with each half valued at around €150,000 by two gemstone experts.

The law states that as no rightful owner has stepped forward to claim the stones in two years, the treasure now belongs equally to the climber who found it, and the owner of the Bossons glacier on which it was found. Technically, the glacier is part of the commune of Chamonix.

The finder, a young climber from Savoie, has wished to remain anonymous. He initially took the box to the local gendarmerie, in a bid to return the stones to their rightful owner.

Mr Fournier said: “I am very happy with the conclusion of this, especially for the finder.” He thanked the climber for “his integrity”.

The gemstones will now form part of Chamonix’s new crystals museum, which is a “real marvel”, Mr Fournier said. The museum is set to open for the first time on December 18.

He said that the museum will contain “high-tech glass displays cabinets similar to those used in major international jewellery shows”.

The stones, which were found in a small metallic box, are mainly emeralds and sapphires.

They are thought to have originally come from an Air Indian plane crash in 1966, when a Boeing 707 was flying from Mumbai (Bombay) to New York. It crashed with 117 passengers on board, at around 4,750 metres altitude. No survivors were found.

The crash happened 15 years after another Air India jet, the Malabar Princess, crashed on the same glacier, in 1950, at 4.700 metres, killing 48. After that incident, rumours abounded that a cache of gold bars had been on board, but they have never been found.

The Bossons glacier is still thought to have considerable debris left from the various crashes. In 1975, mountain guide Christian Mollier discovered the landing gear of the Malabar Princess during a climb.

'In the end, the power of love is all'