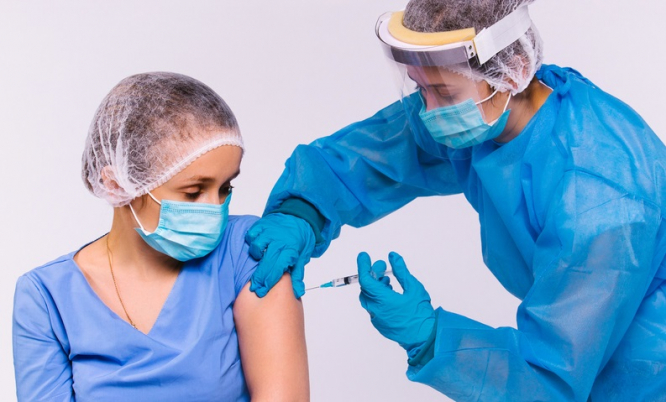 The new rule will require everyone in the affected sectors to be vaccinated by September Pic: PixelsMD Production / Shutterstock

France plans to make Covid-19 vaccination mandatory for 70 professions in the healthcare and elderly care sectors, with sanctions for people who do not comply, prompting mixed responses from workers.

People in these jobs, estimated to include 1.5million people, will need to be vaccinated before September 15, or face sanctions.

The full list of the 70 professions concerned has not yet been released, but a shorter list of professions that will definitely be included is available.

Gendarmerie and police are not included.

Patrice Ribeiro, secretary-general of officer union Synergie Officiers, told LCI: “We wanted to be on the list so that our colleagues would get a vaccine, because they are in contact with the public.

“Sometimes they are required to be physically in contact, so it would seem natural that they would be part of the [mandatory] process.”

Police and gendarmes have had priority access to voluntary vaccination since April.

Government spokesperson Gabriel Attal explained the decision on Europe 1: “It isn’t the same situation [for police and gendarmerie]. Police are of course in contact with the public, but the measure is more to help staff who work in places where the health pass is needed for access.”

Vaccination has not been made mandatory for waiters or waitresses, restaurateurs, retail workers, nor personnel on trains, planes, or buses, despite their heightened contact with the public.

These staff will, however, be required to either take regular Covid tests or be vaccinated, due to the extension of the health pass.

And, with fees for tests set to be introduced from autumn,, vaccination will become the only way for staff to use the health pass for free, rather than having to pay for repeated tests.

Staff in the required professions who do not get vaccinated risk being suspended from work for several weeks, to give them time to comply. If they do not, they risk losing their jobs, said Work Minister Elisabeth Borne, on LCI.

Some workers in the healthcare industry have already registered dissatisfaction with the plans.

Alexandre (not his real name), a 42-year-old osteopath in Var, told FranceInfo: “I do not welcome this announcement. It’s an attack on civil liberties. I am not vaccinated and I do not plan to be.

“Covid-19 is not such a dangerous virus,” he said. “Most cases are asymptomatic and there are more risks than benefits of vaccination. I am suspicious of the composition of the vaccines, and the fact that we do not know the long-term effects.”

As a result, Alexandre and his wife have taken the radical decision to leave their jobs and move countries. They will wait to see what other EU countries do on the issue before choosing a destination.

Another healthcare worker, Sylvie, 53, a nurse from Bouches-du-Rhône, said she would get vaccinated in order to keep her job, but she would do so angrily and reluctantly.

She said: “I am against it. We do not have enough experience with it. We do not know the long-term effects. I have never been infected, so it seems as though barrier gestures are enough.”

She explained that while she had never written off vaccination completely, she would have preferred to wait longer, to do more research, and better inform herself. Instead, she will now have to meet the government’s vaccination deadline.

She said: “If it was possible for me to stop working, I would do it. But as I want to keep my job, I don’t have a choice. But I find it unacceptable to impose this in a free country.”

But one care worker, 59-year-old Gilles from Rhône, said he had initially been distrustful of the vaccines and the government, but since said he realised how necessary it was.

“But I’ve seen so many deaths that I realised that vaccination for care workers is necessary, especially when there is no other treatment available.”

One care worker director in Paris, David Colmont, said that he fears calling for mandatory vaccination will “cause the opposite effect” and also cause “stress in terms of logistics, and staff response”.

He said: “I am very worried about the idea of telling someone they cannot come into work. I can’t see myself telling 10 nurses that I don’t need them to come in, just because they are not vaccinated. In the end, it is society that will suffer.”

One doctor in Toulouse, Cédric, told FranceInfo that making vaccination mandatory will only be effective if everyone gets vaccinated, and that the public responds well to certainty.

He said: “The public need boundaries and certainty –that has been proven by the number of vaccination appointments that were made after the president’s speech. Some people are talking about a ‘health dictatorship’. But we have to think of others.”

Ticked off on TikTok

One nurse, known as Laura, said that she will be quitting her job as a result of the announcement. She posted her reaction to the president’s announcement on the video-sharing site TikTok, saying: “You will take care of yourselves alone.”

The 35-year-old mother-of-two, who lives in Charente-Maritime, said: “They are taking our salary away, there are even some who are suggesting prison sentences if we do not get vaccinated.

“Many people are refusing to be vaccinated. We don’t all have the same reasons. I am personally not doing it because I don’t think we have enough experience with the vaccine.”

She said that while she knows some carers will “concede” out of fear of losing their work, she said that others will join her in quitting.

Laura was already on leave from her job as a care nurse for severely handicapped children before the announcement, due to a stress injury, which she says was caused by worsening work conditions since the start of the pandemic.

Public in favour of mandatory jabs and health pass use

Despite the mixed views among healthcare workers, the public in France is generally in favour of making vaccination mandatory for these sectors.

An Elabe poll for BFMTV found that 76% of the public is in favour of mandatory vaccination for healthcare workers.

The same percentage (76%) said that they were also in favour of requiring the health pass (pass sanitaire) to be shown when boarding a plane, train or bus; when visiting hospitals and care homes (70%), and accessing cultural sites with more than 50 people (66%).

Over half (58%) are also in favour of the health pass being required for access to cafes, restaurants and shopping centres.

Almost two thirds (63%) are in favour of ending free PCR tests except with a medical prescription, from autumn.

‘Make Covid vaccine mandatory for all’: French medical academies
French health pass: Cafes, restaurants risk €45,000 fine if no check
12 questions on how to use the French health pass from July 21