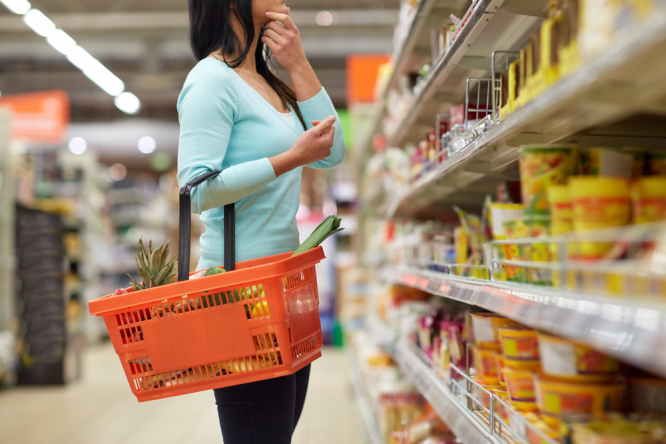 It is expected that people will not need to use health passes to go into supermarkets and food stores Pic: Syda Productions / Shutterstock

President Emmanuel Macron announced the extended use of the French health pass in a televised address on July 12.

How will foreign visitors to France use health pass to go to a cafe?

He said use of the pass will be introduced in France in two stages with the first on July 21 and the second in early August.

The health pass proves that the bearer has been fully vaccinated against Covid-19, has already had the virus and is considered immune, or has received a negative test result in the past 48 hours.

The pass is not a stand-alone document but instead refers to proof of one of the three statuses above, such as vaccine certificates and PCR or rapid antigen test results in paper or digital format.

We answer questions on the new rules:

1.     Do supermarkets count as shopping centres?

Exactly which spaces will need to be accessed with a health pass will be outlined in parliamentary discussions on July 21.

President Macron said people will need health passes to go into shopping centres from August but so far ministers are indicating that the rules will be different for supermarkets.

Health Minister Olivier Véran told BFMTV on July 13: “We are talking about [asking for health passes in] big shopping centres… not supermarkets.”

2.     What are the rules for public transport?

Health passes will be required for long-distance journeys, including TGV, Intercité and Transilien trains, as well as coach and domestic plane journeys.

Although an exact measure of long distance has not yet been defined, Transport Minister Jean-Baptiste Djebbari said the rules would likely be applied to travel between regions.

Health passes will not be needed for using public transport on a daily basis on networks such as TER, Francilien and RATP trains in Ile-de-France, or on the metro or local bus networks.

3.     What are the rules for cultural spaces and restaurants?

From July 21, you will need a health pass to go inside all cultural spaces that accept visits from the public.

These include (but are not limited to) cinemas, museums, theatres, concert halls, monuments, libraries, art galleries and music academies.

From August you will need a health pass to go to cafes and restaurants, whether you are sitting inside or outside on a terrace.

Health passes will not be required in workplace canteens and cafeterias.

From July 21, you need a health pass to use indoor sports facilities that can accommodate over 50 people.

This includes swimming pools, whether they are inside or outside.

Health passes will also need to be shown by spectators in stadiums and other sports venues with over 50 people present.

Government spokesperson Gabriel Attal said yesterday that health passes would not be needed to access campsites.

However, you might need a pass to access some facilities. Mr Attal said: “If there is a restaurant on the premises, then you will be asked to show your health pass [to go inside]”

This also applies to leisure spaces and swimming pools on campsites.

6.     How long after being vaccinated can I use my vaccine certificate as a health pass?

People are considered fully vaccinated after they have received all doses of the vaccine and waited a sufficient amount of time for the body to develop an immune response to the virus.

The health minister said today (July 14) that in France people will be considered fully vaccinated seven days after receiving the final dose, as opposed to 14 days previously.

In EU member states, people will still need to wait 14 days after the last dose before being considered fully vaccinated.

Negative results from PCR tests and rapid antigen tests are both accepted as a valid form of health pass.

In both cases the test should have been taken within 48 hours of using the pass. Digital and paper forms of results are both valid.

Negative results from self-tests are not accepted as a form of health pass.

Children aged 12-17 will have to use the health pass from August 30.

The health minister said that the date for using the health pass had been pushed back to the end of August for this group as it has had access to vaccine appointments for less time than other age groups.

Children aged under 12 will not have to use the health pass.

9.     What are the rules for people who cannot get vaccinated for health reasons?

People who have recently contracted Covid-19 can show proof of this with a positive test result certificate available via the SI-DEP website dated within the previous 11 days – 6 months.

Pregnant women can get vaccinated from the second trimester onwards. So far, no guidance has been issued on access to health passes during the first trimester of pregnancy.

If you had Covid-19 more than six months ago and have recovered you will not be able to get a certificate proving this status from the SI-DEP website, as they only became available from March 28 onwards.

If you have a positive test result taken prior to this date proving you had the virus you should contact the place where the test was taken to ask for a QR code certificate.

11.  What are the rules for people who work in places where a health pass is needed to gain access?

People who work in public spaces where health passes are needed (such as restaurants, cafes and museums) will need to show a health pass when they go to work.

Mr Attal said it would be “incomprehensible” to have different health rules for staff and visitors in the same space.

The rules will only be applied to staff in these roles from August 30 to give them time to get fully vaccinated.

12.  Do police and the military have to get vaccinated?

So far, the government has not made vaccination mandatory for members of the police or the military.

It has also not been made mandatory for teachers, on the basis that children are unlikely to develop serious illness as a result of catching the virus.

Mandatory vaccination has been introduced for health care workers including all staff in hospitals and elderly care homes, paramedics, workplace health teams and freelance health professionals.

It will also be introduced for firefighters before September 15 as “they go into emergency rooms with sick people, and are part of the health transport service”, said the health minister.

21 hours ago
4
Map: in which French departments are Covid cases rising?

13 hours ago
5
Which supermarkets in France have the most offers, deals and promos?