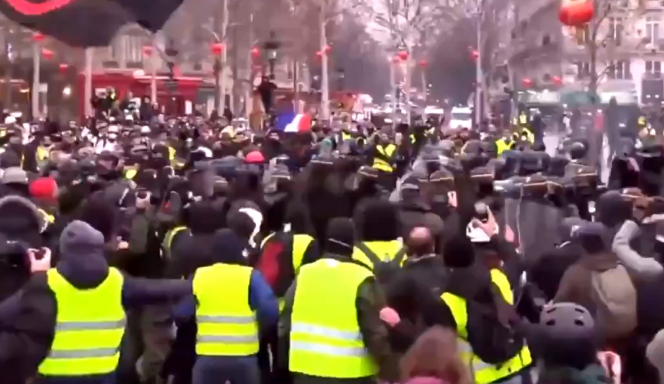 More than half of French people now want the gilets jaunes protests to end, according to a survey.

A total 56% of those polled said they believed the protests had run their course and must stop, while 64% said that they no longer believed their opinions were represented by the gilets jaunes movement.

It is the first time that overall support for the movement has dipped below 50%. Even support from the less well off - the only social demographic in which support for the gilets jaunes remains above one in two (55%) has fallen 10% in a month. Among 'executives', 80% believe the protesters should call it a day, up 31% on January; while 58% of middle-class respondents said the protests should stop.

The survey, carried out for Elabe for BFMTV, was carried out almost three months to the day after the first protests back in November.

Supporters of far-right and far-left politicians Marine Le Pen (57%) and Jean-Luc Mélenchon (64%) were more likely to support further protests, it found. Of those who back President Emmanuel Macron, 31% said they opposed the protests, and 27% said they were strongly opposed to them.

The results were revealed the day after a former French boxing champion was sentenced for assaulting two police officers at a gilets jaunes protest in Paris.

Christophe Dettinger, 37, was sentenced to 30 months in jail. Eighteen months of the sentence are suspended, and he will be able to serve the 12 months in what has been termed 'semi-liberty'.

"I wanted to stop an injustice but I ended up creating another," he told the court, after he was filmed throwing punches during a protest in January in footage that was widely shared on social media

He expressed remorse for his "mistake" which he said was sparked by anger at the "violence" used against demonstrators.

Dettinger is also banned from visiting Paris for six months and must pay his victims sums of €2,000 and €3,000.