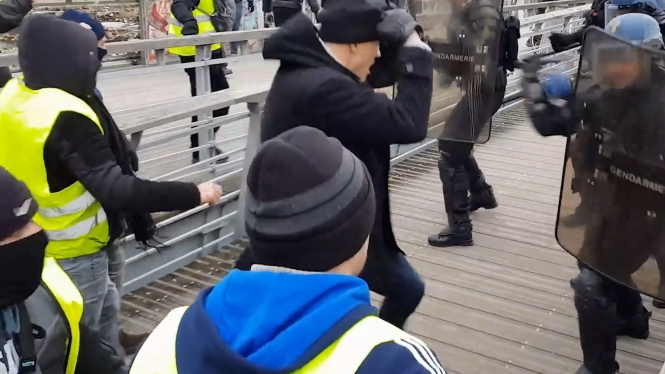 Mr Dettinger, who is originally from Essonne (Ile-de-France) and was lightweight boxing Champion of France in 2007 and 2008, was captured on video repeatedly punching at least one police officer.

He was arrested on Monday December 7 after handing himself in to police.

Originally due to be judged immediately, Mr Dettinger was able to obtain a legal postponement of his trial, to allow him to prepare a case.

In a video published on Facebook just ahead of his arrest, he said: “I wanted to present things the way I see them. I have taken part in all of the Saturday protests in Paris. I have seen the repression, I saw police tear-gassing us, I saw the police hurting people, gassing older people.”

He said: “I am a normal citizen, I work, I just about manage to reach the end of the month, but it’s complicated. I am protesting for all retired people, for my children’s future.

“I am a gilet jaune. I have the anger of the people within me...I am proud of being French, and I am neither extreme right nor extreme left. I love my country.”

Attempting to explain his actions, he said that during last Saturday’s “Act 8” protest, he was once more attacked by police, together with a friend and his wife. This caused him to “react badly”, he said.

Soon after his arrest this week, some gilets jaunes protesters set up a crowdfunding page on the website Leetchi, in a bid to “support” Mr Dettinger and his family.

The page managed to gather over €117,000 via more than 8,000 donations, but following a political backlash, Leetchi decided to take the page down on Tuesday December 8.

In a statement, the website said: “Leetchi works to ensure that funds collected will only be used to finance legal costs, in accordance with our T&Cs and legislation. Our T&Cs forbid all incitations of hatred or violence.

“Taking into account the actions of Christophe Dettinger, no other use of the crowdfund would be acceptable. The funds will only be transferred if we are given just cause.”

The events come as a new poll showed that overall support for the gilets jaunes protests is on decline.

Just 31% of French people said that they actively “support” the movement; a drop of 10 percentage points compared to a similar poll from three weeks’ ago.

Yet, 60% admit to feeling some “support or sympathy” for the protesters’ plight. Just 31% of people said they were “hostile” to the protests.

Two in five (41%) French people said they intended to “participate in one way or another” in the “big debate” proposed by the government, to help the country out of crisis.