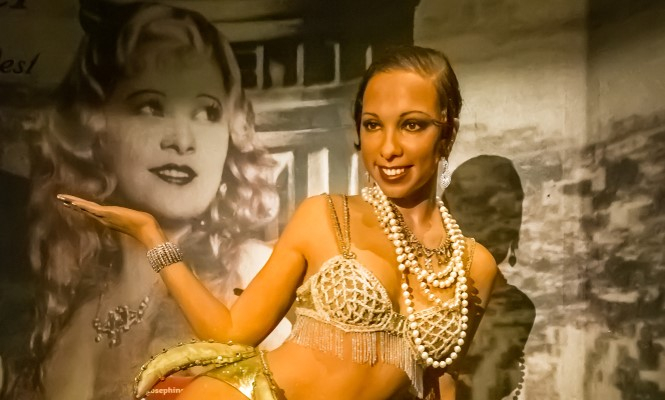 A waxwork of Josephine Baker, who was an iconic figure in France. She gained French nationality and renounced her US citizenship in 1937 Pic: Oleg Anisimov / Shutterstock

The American-born French singer, dancer and actress Josephine Baker is to enter France’s Pantheon in Paris, making her the first black woman ever to be laid to rest in the mausoleum.

The Pantheon is the resting place for great national figures in France, and induction can only be conferred by the president.

Ms Baker was known as an iconic singer and dancer, and also fought in the French resistance during World War Two. She was born in Missouri, US, in 1906, and was buried in Monaco in 1975.

The decision to move her body to the Pantheon was confirmed today (August 22) by a source close to President Emmanuel Macron, as reported by Le Parisien.

Josephine Baker (1906-1975) is to become first black woman to be inducted into Paris Panthéon as a hero of France, Pres. Macron confirms. Died a devote Catholic & remains are currently in Monaco, but will join Zola, Hugo, Rousseau (etc) in the secular mausoleum. Via @le_Parisien pic.twitter.com/YAilxSP1Uh

It comes after a campaign group, including one of Baker’s own sons, lobbied for her induction in the mausoleum.

The group has been campaigning for her induction since 2013, and had gathered 38,000 signatures on a petition.

It read: “Artist, first black international star, muse of the Cubists, resistance fighter during the Second World War in the French army, active alongside Martin Luther King for civil rights in the United States of America and in France...We believe that Josephine Baker, 1906-1975, belongs in the Pantheon.”

Jennifer Guesdon, one of the group’s members, met with the president on July 21, during which the head of state said “yes” to the request, she said.

Another member of the group, Pascal Bruckner, said that Ms Baker “is a true anti-racist, a true anti-fascist”.

Ms Baker’s career mainly focused on Europe, and in 1937 she married Frenchman and industrialist Jean Lion. This was her third marriage, and it allowed her to gain French citizenship, after which she renounced her US nationality.

The Pantheon ceremony will take place on November 30, the date on which Ms Baker married Mr Lion.

Ms Baker would later divorce Mr Lion, and go on to marry another Frenchman, composer and violinist, Jo Bouillon, in 1947.

Ms Baker also raised her 12 adopted children in France, and worked as an agent of the French Resistance. She was later awarded the resistance medal la Rosette de la Résistance, and the Croix de Guerre, and was named a Chevalier of the Légion d'Honneur by General Charles de Gaulle.

She was a key civil rights campaigner, and refused to perform for segregated audiences in the US. Such was her activism that after the assassination of Martin Luther King in 1968, his wife Coretta Scott King offered Ms Baker offered unofficial leadership of the US civil rights movement.

Ms Baker would later decline out of concern for the effect it could have on her children, with whom she lived in Château des Milandes in Dordogne for a time. She would later be offered an apartment in Monaco by Princess Grace.

Ms Baker lived in the magnificent Chateau des Milandes in Dordogne for a time (Photo: OSTILL is Franck Camhi / Shutterstock)

When she died in Monaco aged 68, Ms Baker would become the only American-born woman to receive full French military honours at her funeral.

There are currently 80 figures in the Pantheon, of which just five are women. The most recent to be inducted was Simone Veil, lawyer and politician, who survived the Holocaust.

23 hours ago
2
Map: Gastro outbreaks on rise in France - which areas are worst hit?

8 hours ago
4
France considers petrol cheques: What are they, who would benefit?