Why are France’s new identity cards translated into English? 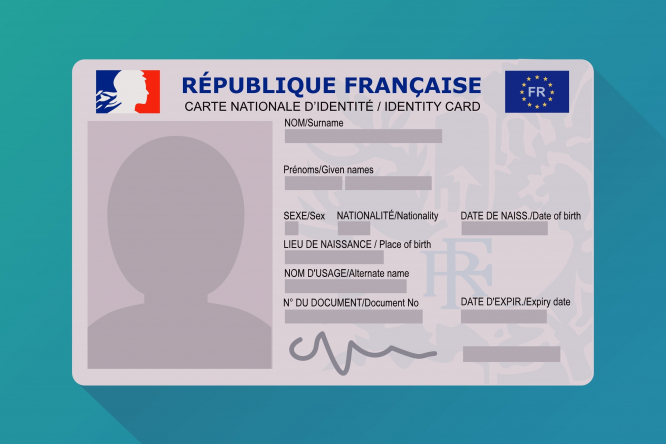 France’s new 2021 ID cards, which are smaller than the old versions, are written in both French and English Pic: Drazbedel / Shutterstock

France’s new biometric identity cards, issued on August 2 this year, contain for the first time both French and English translations of all the fields, such as ‘name’, ‘address’, and ‘nationality’.

The decision to use English on the cards was taken to facilitate travel.

However, it sparked controversy when they were first unveiled back in March.

Barbara Cassin, a philologist, philosopher, and member of the Académie française, France’s main council for matters relating to the French language, called the inclusion of English “insulting”.

“By deciding to translate everything on our new identity card into English and English only, we got it all wrong!,” she wrote in an opinion piece for Le Monde.

She referenced German, Austrian and Romanian identity cards, which are translated into both English and French, and said France too should translate its cards into multiple languages.

“Limiting oneself to English, especially after Brexit, and not for travelling the world as with the passport, but just to travel around our Europe, sends too many wrong messages,” she wrote.

French senator Mickaël Vallet was also against the inclusion of English on the cards, claiming that it was against the constitution.

“A document such as a national identity card should not contain foreign language elements,” he wrote in a letter to the French Ministry of the Interior.

“Little by little, the Globish steamroller is imposing itself with the complicity of the French government, even in our identity papers.”

Globish refers to “global English”, a form of English used around the world, primarily by non-native speakers.

“To travel in Europe, you only need your identity card, so it is clear that the use of English here is intended to facilitate controls in the Schengen area,” he told 20 Minutes.

Several residents from the village of Saint-Quentin-la-Motte-Croix-au-Bailly (Somme) have been unable to get the new French identity cards, launched in August, as the commune name is too long and does not fit the new format.

There is only space for 30 characters in the address section on the back of the cards, Le Parisien reported.

The 38 characters of Saint-Quentin-la-Motte-Croix-au-Bailly therefore do not fit.

The mayor of the village, Raynald Boulenger, said he was alerted to the issue by a resident who could not get a new ID card, which he needed to sit his driving theory test.

“Five or six people in the commune of around 1,300 inhabitants were affected,” Mr Boulenger said, adding that the issue dates back to March or April.

Local authorities found a short-term solution, issuing temporary cards with the shortened name of Saint-Quentin-La-Motte until a longer-term fix can be found before the end of the year.

Saint-Quentin-la-Motte-Croix-au-Bailly may be a mouthful, but it is not the longest commune name in France. That honour goes to Saint-Remy-en-Bouzemont-Saint-Genest-et-Isson, in the department of Marne.

French journalist Jules Grandin found 47 commune names in total in France that have names of 30 characters or more.

He charted them on the map, which you can see in his Tweet below.

Anne-Gaëlle Baudouin, the director of the Agence Nationale des Titres Sécurisés (ANTS), the agency responsible for issuing ID cards, said that mayors had been sent instructions to “find a solution” to shorten long commune names, in particular those with the word ‘saint’ or ‘sur’ in them.

She explained that the reason for the long commune names is that since 2016, many villages have joined together, keeping the two names but merging into one.

She said that ANTS plans to increase the number of characters available in the address section to 49, and also to reduce the size of the characters.

France’s new high-tech identity cards, complete with an electronic chip, may be cutting edge, but the original concept actually dates back 100 years to September 1921.

Proving one's identity at the time was not easy. French people could present various documents including certificates of good character and morals, proof of residence, hunting licences, family records, railway cards, and passports (but only for the wealthy).

This problem prompted an experiment: on September 12, 1921, Robert Leullier, the then prefect of Paris police, announced the creation of a French identity card for citizens residing in the Seine department (Paris and its inner suburbs).

It was at first optional, due to some political opposition to it, and the cards only became obligatory in France in 1940. They did not get off to the best start though, with Leullier’s experiment proving unpopular.

Several journalists at the time reported the complexities of getting one of these first-generation ID cards.

Paul Gordeaux, a renowned journalist, writer, and humorist, recounted his misadventure in trying to get one in L'Écho de Paris.

"It takes a lot of patience,” he wrote.

He said he had to produce various certificates, including one from the concierge of the building he lived in. He also had to bribe two people to pretend to be his childhood friends and act as witnesses.

After all that, he found out that the fingerprint equipment was missing at the issuing centre and that his application would have to be sent to the local prefecture before his card could be issued.

It seems that France’s ID cards have changed a lot in the past century, but frustration at the country’s bureaucratic procedures is still going as strong as ever.

Digital carte Vitale: Where, how and when is this used in France?

How can teenagers prove residency for French nationality application?

Can I travel in the EU with my Withdrawal Agreement residency card?