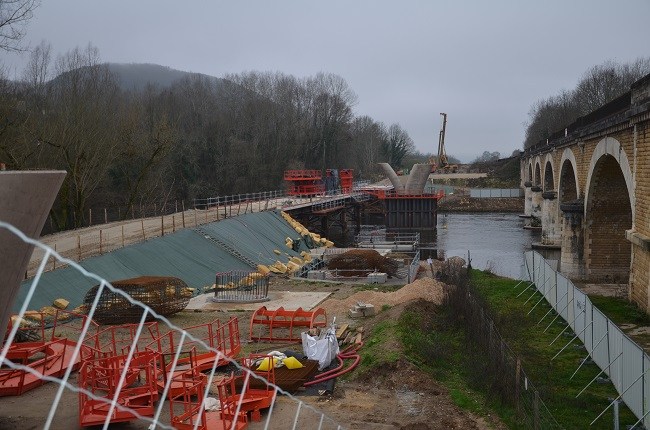 The Conseil d’Etat ordered the suspension of the €32million project – involving a 3.5km road, two bridges over the river Dordogne and a tunnel through a beauty spot valley – as there was no “imperative major public interest reason” for it.

The court said there were many protected bird and animal species in the Beynac area and their habitat should be disturbed only if strictly necessary.

Half-finished concrete pillars have been left jutting out of the Dordogne, and work on a road has been abandoned.

Depart­mental council presi­dent Germinal Peiro called the decision “scandalous”, saying they are “victims of the bad wor­kings of the state”.

He wants to continue the works, saying the bypass would mean fewer hold-ups in Beynac, where the existing road is often choked by summer traffic.

Beynac is between Sarlat and Ber­gerac and he says it would improve transport links.

Stéphanie Berbessou, president of the association J’aime Beynac et sa Vallée, told Connexion: “Environmental issues should not just take the fauna and flora into account, but also the people who have to live with pollution day to day.”

Opponents of the work argue that congestion in Beynac lasts only a couple of months a year and it is not in the public interest to lay concrete through one of France’s most beautiful valleys.

It has three chateaux and more than 700,000 visitors a year.

The site is in the heart of a Unesco biosphere - the largest of 12 such sites in mainland France – and a Natura 2000 site, with more than 100 protected species.

They also say it is a waste of money in a department which is France’s third most indebted.

They refused to give up when work started with permission from the prefecture.

Protestors hit the headlines when one stopped works by living on a crane for six days and nights. How­ever, they lost 10 court cases locally and so appealed to the Conseil d’Etat.

Jean-François Vidalie, from the group Sauvons La Vallée de la Dor­dogne, said: “This was a big victory for us, but it is not over yet. It must now be reviewed again, in depth, by the Bordeaux administrative tribunal. This could take a year. In 95% of cases, regional tribunals follow the judgment given by the Conseil d’Etat.

“We are working on ways in which the site can be reverted to what it was and are confident it can be done for about €5million, far less than the cost of continuing.

“We also think there are practical and less devastating ways of reducing traffic in Beynac.”

There are two online petitions: one to stop the works and one to get them started again. Ms Berbessou said locals now realise they must fight if they want the bypass. She said: “The bypass is the only possible solution to make life in the village bearable.

“It is not just in the summer but all year round when lorries come through.” She thinks a possible solution would be a local referendum.