For and against: Miss France beauty pageant 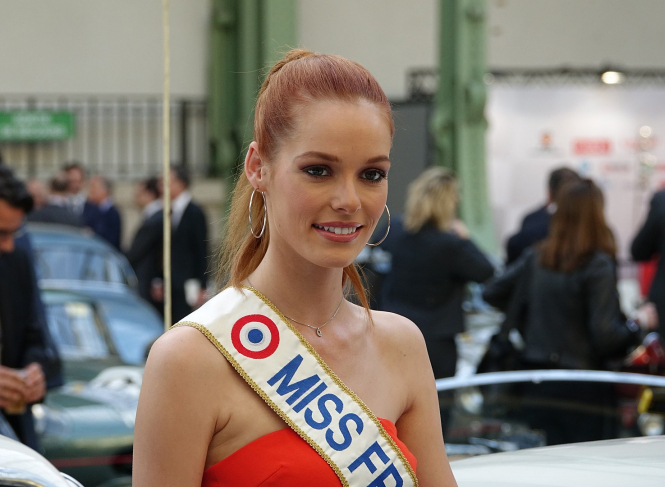 It beats viewing figures for the last day of the Tour de France – seven million – and compares to 15,000 online viewers to Miss Great Britain, which was last on UK TV in the 1980s.

The show introduces 30 contestants from across France’s regions and overseas territories in different outfits, including swimwear.

Five finalists are then chosen by the public and TV jury before the public votes for its favourite.

She must not have a criminal record nor children, nor have had plastic surgery nor any “glamour” photo shoots.

This year’s competition takes place in Marseille, on December 14, with a theme of “world travel”. Robbie Williams is guest of honour.

But feminists say the show depicts women as objects.

We talk to two people with opposing views on it.

The TV show remains an entertainment where, for three hours, we offer dreams, beauty, and elegance – and choice, as it is the public who vote to elect Miss France.

Miss France has evolved hugely in recent years. On one hand, on the production side, because the production company Endemol Shine now offers a real show prepared in every detail.

Women have also evolved, so candidates have evolved. When I introduced myself to become Miss France, 18 years ago, I sometimes found that there were stereotypes and preconceived judgments about being a “Miss”. Today, this perception has changed.

We give a platform to Miss France so they have the chance to speak.

Previously, there was Geneviève de Fontenay, who was a prominent media figure and who was better known than the Miss France. Today, Miss France has been given her place back. The organisation is at the service of her image and does not take over.

Miss France has thus become closer to the public. The public can discover these women, get attached to them, and when you get attached to someone you want to continue to follow them over the months and the years.

Miss France is not a profession but it has become a huge springboard because it gives you the opportunity to make yourself known in a professional environment, or to make people recognise your talents. That’s why some contestants have become comedians or singers, and others businesswomen.

Every “Miss” has to choose a cause to defend and they are free to choose the cause they want. Some are involved in several causes.

There is not one Miss France that looks like another. They are all different, with different desires and commitments. We are not trying to clone a Miss France, or it would be boring.

During the competition, they must be treated equally, so they have to be dressed in the same way and speak for the same amount of time.

I am a feminist and I have a fairly modern vision of women. Today, Miss France gives women a voice and it offers them a lot of opportunities.

Miss France gives a highly stereotypical image of women. And it is a burden for many women as it represents a model to which we should conform, and many do not succeed.

It is also a model that corresponds to the male perception of women.

It represents the image that a lot of men have of women, a kind of dull femininity that they desire.

Over the years, the image has changed a little. Women taking part in the contest have also changed. They talk a lot more.

While the contest was using the women before, they are now using it for their career and life projects.

The show remains popular but what is awkward about it is the lewd spirit that people who are watching can have.

Women are presented as objects, and conform to what males want from them. When we, as women, look at them, we see beautiful young women, although a little stereotypical.

We do not really recognise ourselves in these women because they are presented in a certain way.

They are wearing these costumes, which do not necessarily follow their tastes and choice. For many young girls, this is rather problematic.

During the show, the scenery is quite repetitive. There is no incredible creativity. There is not enough renewal every year and a lot more would have to be done to make the show more modern.

There is also a “princess” side to it. This contest can appear like a little girl’s dream. We only see the magic side of it.

Thus, young girls can dream of it as they are looking for a form of recognition.

There was a time when women were only recognised for their beauty but the world has evolved. Today, women have many more options. They can be and do anything. And society seems to have changed faster than Miss France.

There is obviously a form of diversity in the contest but then, for the show, they manage to make everyone look like everyone else. There is a kind of physical standardisation and a standardisation of the speech too. But we have to remind ourselves that there are real women behind those appearances.