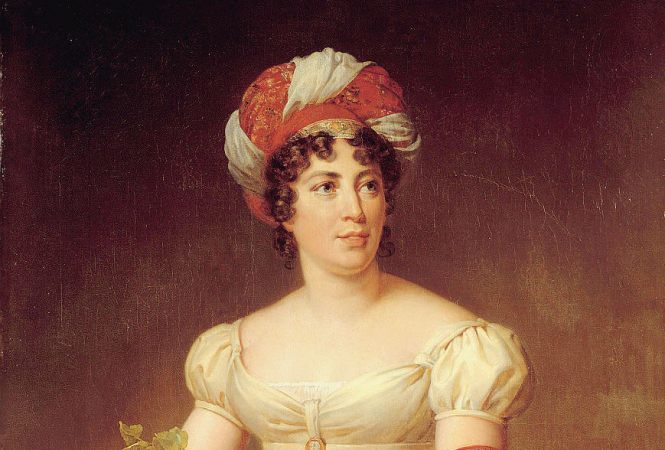 A portrait of Madame de Staël, by French artist Marie Eléonore Godefroid in 1813
By Connexion journalist

Germaine de Staël (1766-1817) was a progressive, liberal intellectual, a writer, philosopher, political campaigner – and a thorn in Napoleon Bonaparte’s side.

She believed in equality, limiting government powers, and in the healing properties of nature, and love. She was a witty conversationalist and stylish dresser, outraging sartorial conventions.

She was cosmopolitan, independent and strong. She wrote plays, novels, essays, travelogues, and political theory. Her ideas laid the foundations of Romanticism and female emancipation.

She was born Anne-Louise Germaine Necker, the only child of an intellectual mother Suzanne (Cuchod) and Louis XVI’s Finance Minister, Jacques Necker.

She was thoroughly educated from an early age, and was much feted and admired at her mother’s literary salons.

Wealthy and well-connected, she was brought up to be intellectually enquiring, articulate, and self-confident

Having read Montesquieu, Shakespeare, Rousseau and Dante, as a teenager she produced a three-act romantic drama in 1786, and a five-act tragedy in 1787.

In 1786, at the age of 20, she entered an arranged marriage with the 37 year-old Baron Erik Magnus Staël von Holstein.

He was an attaché of the Swedish legation to France, and an inveterate gambler. They had two daughters who both died in infancy, and then in 1790 her parents and her husband, having fallen out of favour, went into exile in Switzerland.

Alone in Paris, but protected from the Revolution by her position as a diplomat’s wife, she gave ‘coalition dinners’ in the Swedish Embassy.

She also gave birth to her son Ludwig August, whose father is believed to have been the Comte de Narbonne.

Having witnessed the French Revolution, she lobbied to replace the fallen absolute monarchy with a constitutional monarchy along British lines.

It was natural that she used her high society network for her political manoeuvring, but it was dangerous.

Having helped various people escape from Paris, in 1792 she left for Switzerland, where her son Albert was born (also fathered by the Comte de Narbonne).

In January 1793, she courted scandal by travelling to England to join the Comte, despite England and France being at war.

Four months later, however, she was back in Switzerland, publishing a spirited defence of Marie-Antoinette.

Swiss-French political thinker and writer Benjamin Constant visited her a year later, ostensibly to talk about suicide, and they began a relationship. The couple moved back to Paris in 1795. In 1796, her book about suicide attracted the attention of Schiller and Goethe.

She also began entertaining in a more formal way. Madame de Staël’s literary and political salons became influential, until she was ordered to leave Paris.

She returned a year later, lobbying and manoeuvring for the restoration of the monarchy. She was also pregnant again, and gave birth to her daughter Albertine that year. The child was assumed to be Constant’s.

By this time, Madame de Staël lived independently of her husband, entirely absorbed in politics and confident that her ideas were correct.

She wanted to see the end of the Revolution and the establishment of a French Republic and was so well connected that she was able to explain her ideas to Napoleon on at least two documented occasions.

'She teaches people to think who have never thought before, or who had forgotten how to think' - Napoleon

In 1800, Napoleon even appointed her lover Constant as a member of the ruling ‘Tribunat’ assembly – but he was exiled for his speeches two years later.

Napoleon believed the texts were written by Madame de Staël. It was a reasonable suspicion. The pair had become one of Europe’s most celebrated politically-influential power couples.

Exile did not prevent the pair writing political theory and commentary, and it did not prevent people going to see them. Napoleon said she should stick to knitting. “She teaches people to think who have never thought before, or who had forgotten how to think,” he complained.

Her house was a social hub, a regular staging post for foreign diplomats, political opponents, members of the government and of Bonaparte’s own family – which made Napoleon suspect a conspiracy against him.

So when she protected journalist Jean Gabriel Peltier, who had plotted the assassination of Napoleon, he exiled her without trial. She was ordered not to come within 200kms of Paris.

First in Germany and then when her beloved father died, in Château de Coppet, Switzerland, which she had inherited. She then travelled to Italy, further developing her political theory.

In 1805, she moved back to France and spent a year writing about Italian culture and history at Château d’Acosta, Aubergenville. When it was published, Napoleon ordered her to return to Coppet.

By now, however, she had his measure. Nor was she the only one to realise he was turning France into his very own personal feudal empire. Stendhal turned up at Coppet, as did Mme Récamier, Prince Augustus of Prussia, and Chateaubriand. The table was laid for upwards of 30 people every day.

Madame de Staël’s travels were not over. She and Constant lived in Auxerre in 1806, and Rouen and Aubergenville (1807). The same year she also went to Vienna.

She wrote about Germany, praising the country’s literature and philosophy. Pretending to be en route to America, she managed to get permission to go back to France determined to publish her book about Germany, in which she called French political structures into question and indirectly criticised Napoleon.

When censored, she complained to Napoleon himself and in 1810 she was exiled to Coppet once again.

Her consolation appears to have been a wounded army veteran 23 years her junior, called Albert de Rocca.

Exile in Switzerland was not enough for Napoleon. Visitors to Coppet found themselves persecuted by the French police and even exiled themselves. So in 1812, aged 46, she left Coppet with her manuscript about Germany, and her two children and travelled to Vienna, and Russia, giving birth to Louis-Alphonse de Rocca on the way.

During Napoleon’s invasion of Russia, she travelled across what is now Ukraine and Poland where she rejoined Rocca, who had deserted the French army.

They travelled on, eventually arriving in Kiev, from where they headed north to Moscow and then to St Petersburg where she twice met Tzar Alexander I to discuss politics, philosophy and everything in between.

Apparently indefatigable, she next travelled to Stockholm where she began writing a book about her 10 years of exile.

But after eight months, she interrupted work on the manuscript to travel back to London, where she received a great welcome.

According to Byron, “she preached English politics to the first of our English Whig politicians, then preached politics no less to our Tory politicians the day after.”

Her book on Germany, ‘De l’Allemagne’ was finally published, in French and translated into English.

In May 1814, when Louis XVIII was crowned king of France, she returned to Paris, published her considerations on the Revolution and re-established her political and literary salon. Once again she was at the hub of French affairs.

When Napoleon escaped from Elba she never forgave Constant for welcoming the news. She retired to Coppet once again, and remained there until after the Battle of Waterloo, when she travelled to Italy and back.

Byron was a frequent visitor to Coppet, calling Mme Europe’s greatest living writer despite not agreeing with her about Napoleon.

By the winter of 1816/17 she was back in Paris pursuing her friendship with Wellington, and persuading him to reduce the army of occupation.

Her health was failing, but by the time she died in Paris in 1817, Louis XVIII was back on the French throne.