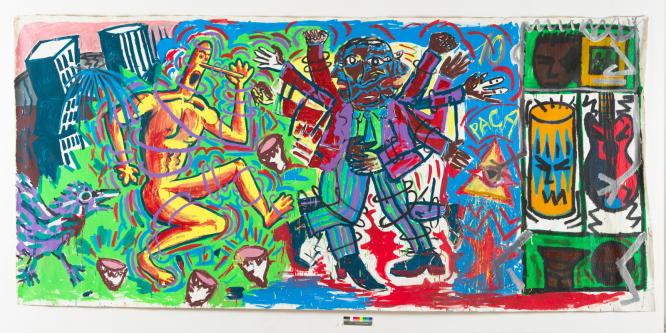 As well as paintings on display, there are sculptures, films, videos, posters, music and archived documents to explore at the exhibition Pic: Adagp, Paris, 2021

Figuration Libre is a French art movement which began in the 80s, equivalent to ‘Bad Painting’ in the US and Neo-Expressionism in Europe.

‘Bad painting’ is a deliberate disregard for conventional styles of painting, an attempt to look at figurative art with a fresh eye. It followed on from pop art and the point was to debunk accepted norms with eccentric, even amusing deviations from traditional ideas of style and good taste.

The movement is explored in an extensive exhibition at the Musée des Beaux- Arts et la Cité de la Dentelle et de la Mode in Calais. Spanning the years 1979-1986, more than 200 works by 50 different artists from around the world are on display, demonstrating how thoroughly the received ideas of the era were turned upside down.

As well as paintings, there are sculptures, films, videos, posters, music and archived documents.

Figuration Libre was born on the streets, in magazines, in nightclubs, as a reference to popular culture of the time. The exhibition’s curator, Pascale le Thorel, says the movement was rock and roll. “It was punk, sex, drugs and street art. It was seductions and openings to new media, and new ways of mixing media.”

She notes that it has a particular resonance in 2021. “This art is all about physical contact, collaboration, joy, parties and celebration. It’s about freedom of expression, of bucking the trend. The opposite of what we have all lived through in the pandemic.”

She hopes people will relate to it as a cheerful antidote to the last year’s restrictions and curfews.

One of the artists exhibited is Sam McEwen, a British-American artist who as a young painter gained early acclaim in the New York art scene during the 80s. Her work focuses on colour and form. She is currently working in London.

There is also a cross-over into Neo Punk, designed to shock and confuse, to provoke a sense of challenge. It used the shock value of aesthetics which were traditionally considered ugly to disturb complacency and trigger a more questioning frame of mind.

The point was to make people question their attitudes, rethink their opinions, take another look at their values.

The same waves were being made in other parts of the world, with varying shades of political overtones and this is reflected in the wide international selection of artists shown.

Salomé is a German artist whose paintings are exhibited in museums around the world. One of the members of the art group Junge Wilde (Wild Youth) or Neue Wilde (New Wild Ones) he is also a sculptor and a punk singer.

Afrika (born Sergei Bugaev) is a Russian artist who also produces performance and installation art. In his work he has explored issues of collective -v- individual identity of Russians after the break-up of the Soviet Union, for example.

Tseng Kwong Chi also addresses identity in his work. A Hong-Kong born American photographer, he is best known for his series of photographs East Meets West, (also called the Expeditionary Series) which were self-portraits taken wearing what he called a ‘Mao Suit’ and sunglasses in various iconic tourist locations.

“It was the last great art movement to have emerged,” says Pascale le Thorel. “Since then, digital and other innovations have been developed but a new movement hasn’t really appeared.” This does not mean that another movement will not emerge, but in today’s cultural climate, she thinks the exhibition has much to offer. “This is art that is accessible to everyone, there are no codes to understand. It just is what it is... a joyful celebration of humanity.”