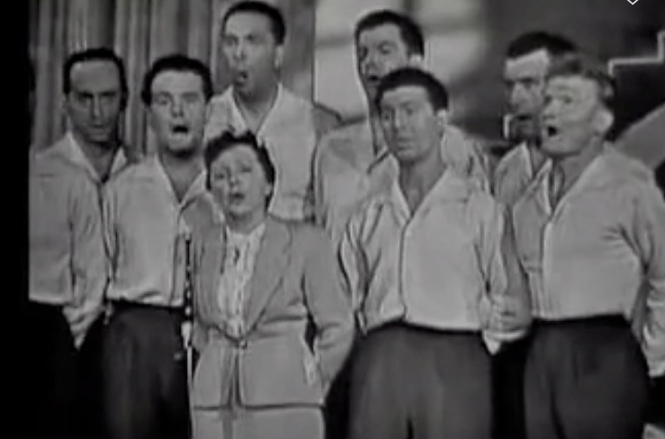 Fred Mella, the last surviving member of Les Compagnons de la Chanson – a group of nine singers that enjoyed enormous popularity in France from the 1950s to the end of the 1970s – died in November aged 95.

The group of singers, always dressed in white shirts and blue trousers, were perhaps best known for their accompaniments to singing ‘sparrow’ Edith Piaf (pictured above during a TV performance - see video here or below).

Ardèche-born Mr Mella gave his final concert in 2008, at L’Olympia in Paris, 25 years after the Compagnons de la Chanson played their last show.

Voltaire, Mixte will feature teenagers and teachers at an all boy’s school that sees the arrival of female pupils, and promises themes of “love, emancipation and sexuality”.

The second, Opérations Totems, is a Cold War drama featuring spies working in France and Africa.

The major television drama on TF1 in late autumn 2019 (any such blockbuster series with a big-name cast is called ‘la série événement’) was the epic mini-series Le Bazar de la charité, which told the story of a notorious Paris fire in 1897.

Almost one in three French viewers (téléspectateurs) tuned in for the first episode of the €17million series, in which the fire was shown taking hold at a huge wooden shed hosting the Bazar de la charité, an annual charity event attended by many aristocrats.

The bazaar featured a wood, cloth and cardboard recreation of medieval streets and a cinematograph, which caught fire, causing panic and leading to 120 deaths.

Camille Lou, Audrey Fleurot and Julie da Bona (pictured, bottom) starred in this first ever TF1-Netflix collaboration, which is now available on Netflix.

The winner of the acclaimed literary prize the Prix Médicis for 2019 was La Tentation (The Temptation) by Luc Lang, a novelist who is also an art theorist who teaches aesthetics at top Paris art school École nationale supérieure d’arts de Paris-Cergy.

The thriller follows a Lyon surgeon struggling to find a place for compassion in the modern world, in which his grown up children seem driven by greed. The story’s ending was said by one critic to feature an “apocalyptic redemption”.

The Prix Médicis was launched in 1958 aimed at rewarding a writer “whose fame does not yet match his talent”.

American visual artist Man Ray (Emmanuel Radnitzky, 1890–1976) is best known for his portrait photography in bohemian Paris in the 1920s – with subjects such as his lover, the gal-about-town Kiki de Montparnasse – and for his affair with Surrealist snapper Lee Miller.

However, his lesser known but equally acclaimed talent for fashion styling and photography is being celebrated in Marseille. Man Ray Et La Mode runs until March 8 at both Musée Cantini and Château Borély.

Pictured (left) is his image of Marie-Laure de Noailles in a fishy frock for the “Le fond de la mer” (Bottom of the sea) ball in 1928.