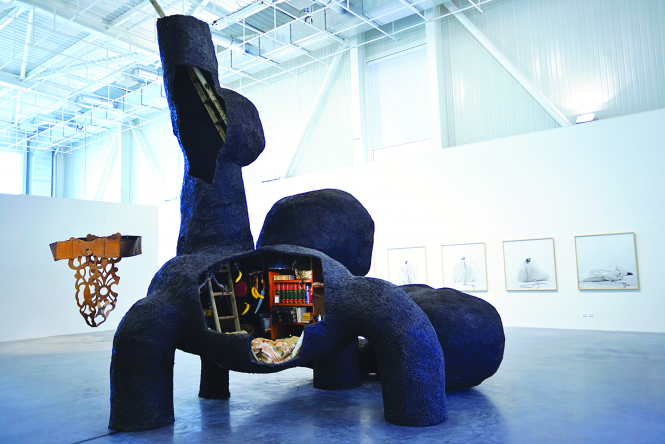 Le Terrier (‘the burrow’) is at once a strange looking machine, and a very familiar hide-away. It is a protection, a place to be private, to hide away from the world, and yet it is being exhibited. One wall is missing.

So it is an exhibitionist hidey-hole. Or is it? Since it was built to be exhibited, is it the equivalent to a child shouting, “I’ll run away, I will!”?

This massive installation by Gilles Barbier is part of his exhibition ‘Machines de Production’ at the Musée Soulages in Rodez. Given the ambivalent nature of ‘Le Terrier’ it is no surprise that a request to interview the artist about this giant installation is met with a refusal. “He doesn’t like phone calls, doesn’t like talking. You can email him if you like, because he doesn’t mind text,” says his publicist. “But in principle he is in agreement with talking to you.”

I call Marianne Le Métayer, the Director of the Galerie Vallois in Paris, where he has held exhibitions for the last three decades. “He likes to be able to think about his replies,” she says. “He’s not shy exactly, just prefers the pace of written communications. It’s a reference to [comic strip character] Gaston, who is so lazy that at work instead of dealing with paperwork he piles it all up, makes a burrow inside it and then goes to sleep.”

So I ask her about the bananas in the burrow. Are they a favourite food? “No, that’s a kind of running reference to banana skins. They crop up a lot in his work. You know, you slip on them and then you could find yourself in another world.”

So they are like sliding door? “Mmmm, not so much. He references a lot of comic strips in his work, a lot of science fiction.”

I have to confess I have never heard of Gaston, do not read comic strips, and have never read much science fiction either. After the call finishes, I wonder if the bananas aren’t also a reference to his birthplace?

Gilles Barbier was born in 1965 in Port-Vila in what is now called Vanuatu, is an island country in the South Pacific Ocean. Until independence in 1980, the archipelago was shared equally between France and the UK in a condominium arrangement. He arrived in Marseille at the age of 19 where he studied history of art, and fine arts. He is married with one child, and still lives in Marseille. (Is that his burrow?)

He uses many different media and techniques in his work, producing sculptures, drawings, collages and massive installations like ‘Le Terrier’. He was one of the first artists to establish himself at La Friche la Belle de Mai, which is a workspace in the ex-Seita tobacco factory, for around 400 artists (sculptors, actors, painters, photographers, dancers and producers) who work there every day.

“Other recurring themes are Camembert, ribbons, speech bubbles. The bananas are about sliding between projects. They’re also a kind of signature. And the piles of books reflect his attachment to the written word. His book ‘Vu d’en Bas’ (Seen from Below) is a collection of different texts, reflections, snippets about his life, his work, the history of art... all sorts of things.”

In the 90s, faced with so many possibilities, he invented The Game of Life as a way of navigating the choices available, setting himself tasks that would occupy him but leave his mind free to wander. One of them was recopying pages from the dictionary. The Game of Life is therefore a production machine, a way of getting moving.

Machines de Production at the Musée Soulages in Rodez, until May 16, 2021.

A brief tour of France’s seasonal crèches and markets