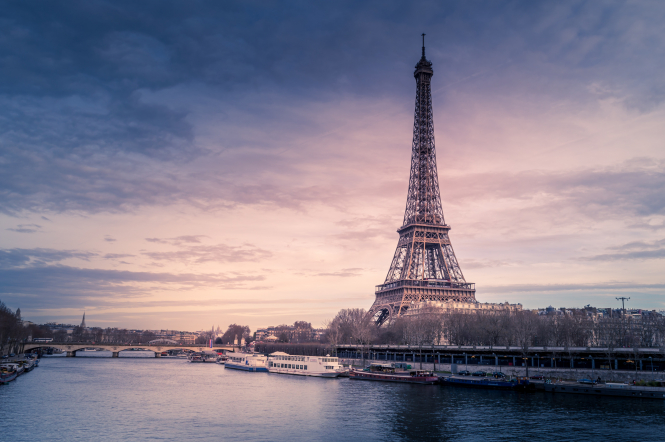 Update, December 2: The 14-step section of the Eiffel Tower's spiral staircase was sold for €274,475 in Paris on Tuesday, nearly ten times the guide price.

The original part of the Eiffel Tower was put up for sale by auction house Artcurial on Tuesday, (December 1).

The spiral staircase is made of iron and originally linked the second and third floors of the tower. Standing over 2.5 meters high, and weighing 1,000 kg, it had an estimated price of €30,000-40,000.

The staircase was made in 1889 and was a part of the tower for almost 100 years.

Then, in 1980, the organisation that managed the Eiffel Tower wanted to modify the building to make it lighter and to ensure it conformed to modern safety standards. Consequently, a spiral staircase linking the second and third floors was replaced with a lighter, larger structure that was deemed to be safer.

The original staircase was cut into 24 pieces, each between two and nine metres long.

Sabrina Dolla, director of design at Artcurial, told news source Le Figaro: “One piece that was 4.3 metres long was kept on the first floor of the tower, and three others were given to French museums including the Orsay, la Villette, and the Museum of the history of iron. The other 20 were auctioned off.”

She added that the piece on sale is in particularly good condition. Others have fallen victim to rust, have been damaged or have pieces missing.

Pieces of staircase now all over the world

Since first being auctioned in the 1980s, the piece of the staircase on sale today has been owned by a collector from Canada. Ms Dolla said: “The Canadian owner installed the staircase in front of the headquarters of his business. Today, having reached a certain age, he has decided to put his affairs in order and sell the staircase.”

Parts of the original staircase are thought to be all over the world. Some of their whereabouts are unknown, but others are available for public viewing, including in the garden of the Yoshii Foundation near Tokyo, Japan; inside the Statue of Liberty in New York, US; and even in Disneyland, Florida, US.

Ms Dolla said: “For foreigners, it’s like bring a little piece of France to where they are.

“And collectors tend to keep [the staircases] unless they have to sell them. The singer Guy Béart owned two of them before selling them, and the French sculptor César bought one to include in his sculpture in homage to Gustave Eiffel [the architect who designed the tower].”

She added: “As well as being a piece of history, the staircase on sale today is a very beautiful object even outside its original context.”