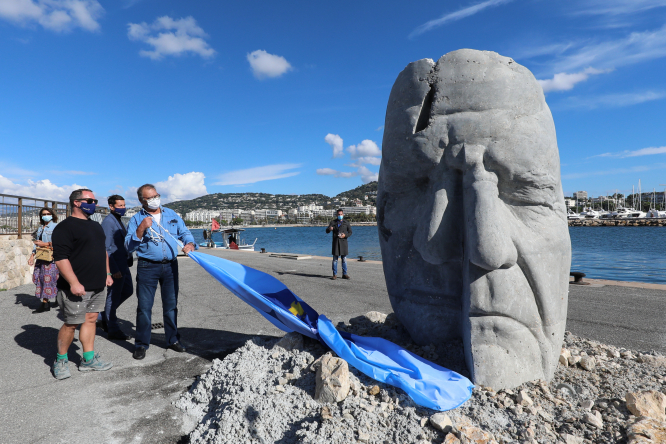 The first underwater art gallery of its kind in Europe has “opened” off the Cannes coast.

Six sculptures by British artist Jason deCaires Taylor were submerged at the end of November in an area designated as an “eco-museum”.

The sculptures reflect the values of Cannes, said Régine Resbeut-Montanella, the town councillor leading the project.

“It came about by accident. I just happened to read about Jason’s work in a magazine and thought how perfect it would be for Cannes,” she said.

One of the Top 25 Wonders of the World

Taylor is a British sculptor, conservationist, underwater photographer and scuba diving instructor who has installed sculpture parks off the coast of Mexico, the Bahamas and in the Caribbean off Grenada, where his work is listed as one of the Top 25 Wonders of the World.

“It has been on the cards for about five years,” he said, “but getting the various permits took time.”

He is pleased, however, that he and his team managed to finish the project, given the difficulties of travelling and working this year.

“The six sculptures are a series of masks based on ordinary local people."

“The reference is to the performing arts, which are so associated with Cannes, and also the Man in the Iron Mask, because the museum is so close to Fort Royal on the Ile Sainte- Marguerite where he was imprisoned."

“We held a public casting session for volunteers who could prove they lived in Cannes, and I took a whole range of masks of old and young people. Then I selected six faces I thought were the most full of character and based the sculptures on them."

“The replicas are not exact representations but are still recognisable. The models know who they are! Each one is around two metres tall and weighs 10 to 12 tonnes. To see the sculptures, people will have to swim out, but it’s only 20 metres from the beach off the island."

“The waters are incredibly clear and the bottom is flat. It’s free, and it’s public, so anyone can go and see them.”

Mother Nature is fully expected to put her own finishing touches to the artworks.

'It is a metaphor for the sea'

“The creative work will continue, in a way. The site is already surrounded by waving seagrass, and flora and fauna will attach to the sculptures and grow on them.”

It will be a new experience for the artist. “It’s not a tropical reef system, but they’ll change and go green eventually.

“The changes will be according to the water temperature and quality, and the surrounding eco-system. Sea urchins, sponges, and seaweed will grow but they’ll remain recognisable.” Each sculpture is composed of two faces, split down the centre to make the mask and the person behind the mask."

“It’s a metaphor for the sea. The external mask is powerful and solid, but the person behind the mask is more fragile and in need of protection. That’s like the sea, which looks immense, powerful and indestructible, but it is fragile and in great danger.”

The artist’s works are constantly evolving and part of the art is documenting the changes wrought by nature.

“I go back to my work now and again to document the changes, but now I have so many projects all over the world and travel is so difficult, I’m struggling to keep up."

“For Cannes, we’re wondering about installing an underwater webcam to keep up with the changes, but we shall see if that’s possible or not.”

The project is not only emblematic of Cannes’ cultural commitment, but is ecologically- friendly, says Ms Resbeut- Montanella.

“The sculptures are made from pH-neutral material which has no ecological impact, and are designed to provide refuges where flora and fauna can flourish.”

The installation is just south of the Ile Sainte-Marguerite, which has been badly neglected in the past.

“The site has been cleaned and renovated, which is a plus for the ecology. Also, they are only a few metres under the surface. People won’t need diving equipment to see them.”

Another advantage is that the current swimming-only zone has almost doubled in size to include the eco-museum, making the area inaccessible to motorised boats, she said.

Reducing the number of small craft in the waters off Cannes is a priority for the mairie. “The sculptures will be a starting point for educating people about pollution and protecting the seas.”