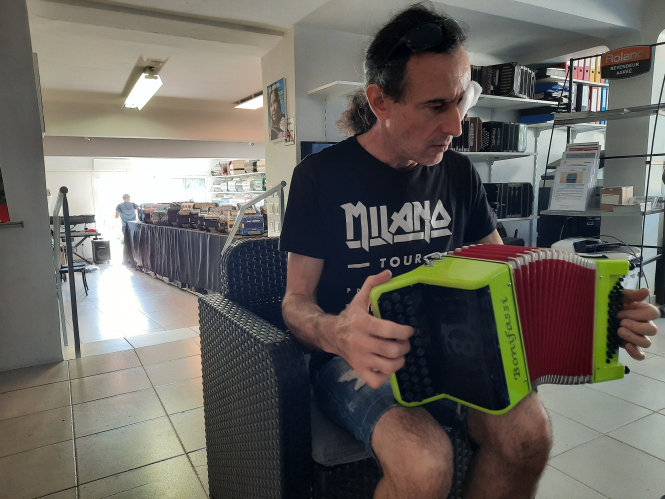 Stéphane Bonifassi has been making, repairing and selling accordions in his workshop on the outskirts of Nice for more than 23 years
By Connexion journalist

Professional accordionist Stéphane Bonifassi could not find an instrument on the market that suited him – so he started making his own.

He has now been making, repairing and selling them in his workshop on the outskirts of Nice for more than 23 years.

“It was annoying to go and buy an expensive instrument and not be satisfied because I couldn’t find what I wanted.” He opened his workshop in 1997 and the first Bonifassi accordions were born."

He is now the proud inventor of what he describes as the world’s smallest accordion, dubbed “the baby”. It is one of 90 Bonifassi models.

He said that over the years he has sold his instruments to many well-known musicians, including French singer and accordionist Claudio Capéo.

“It’s much easier to sell them than to make them. We do a little bit of advertising and they are sold within a couple of minutes,” he said.

Making them can take several years. “In a factory with 20 workers, each person working on one element, you could finish an accordion in six months. If it’s just a little business like mine, where it’s just one person, it takes at least three years, sometimes even four or five for the bigger accordions,” he said.

Each instrument contains anywhere from 3,000 to 16,000 individual pieces

The first step is planning.

The details of the accordion – size, shape, number of notes, style – have to be worked out in advance. Then the wooden body is constructed, along with a metal pallet.

There are countless more steps, including sanding, painting, gluing, inserting the bellows, the internal mechanisms, the buttons and the reeds, before it can be finished.

Every step must be completed with the utmost precision. “If there is any error during the process, the accordion is unusable,” Mr Bonifassi said.

The accordion works when the player compresses or expands bellows while pressing buttons or keys on either side. These buttons or keys cause pallets inside to move, which allows air to flow across metal strips, called reeds. These vibrate to produce sound.

The accordion was probably invented by Christian Friedrich Ludwig Buschmann, a German musical instrument inventor, in 1822. It has evolved a lot over the years in style and image.

'A long time ago, it was considered an instrument for poor people'

“Now it is taught in prestigious music schools, it is used in classical music, contemporary music, jazz. It is becoming a more noble instrument,” he said.

Becoming an accordion fabricant is difficult. “I learned by going to workshops, watching, trying, taking ideas from everywhere. There are young people who are interested but it’s difficult. There are so many steps involved,” he said.

He works with at least 35 specialist sub-contractors to produce one accordion.

“Carpenters, cabinetmakers, varnishers, glue specialists, a guy to make the metal reeds, someone to do the laser cutting to add design touches, the people who make the internal mechanisms… Otherwise I would need 20 years to finish an accordion.”

Mr Bonifassi said he enjoys the work. “It’s a satisfaction. When an accordion is finished and I hear that it sounds good, it’s a pleasure.”

His education may have been on the job, but there is an accordion option available to students as part of a two-year certificat d’aptitude professionnelle (CAP) qualification to become an assistant technique en instruments de musique.

A two-year brevet des métiers d’art (BMA) qualification in instrument-making with an accordion option is also available. But finding a physical course is difficult.

The European Technological Institute for Music Professions (ITEMM) in Le Mans offers a programme of short internships for professionals.