A brief tour of France’s seasonal crèches and markets 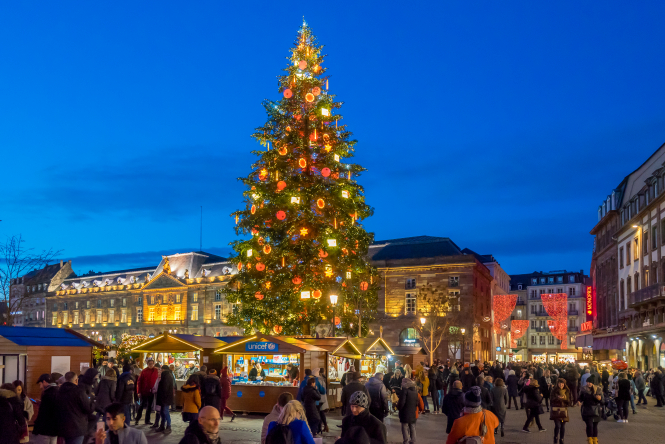 The multiple Christmas markets in Strasbourg are the oldest, biggest and best in France. You can get lost in them, and the decorations are breathtakingly beautiful
By Samantha David

Traditionally, the festive season is a wonderful time in France: what is better than exploring a town and doing a little light Christmas shopping – with some festive culture thrown in?

Of course, along with almost the whole of 2020, this Christmas is set to be unusual. It is unlikely that children will be queueing to sit on Santa’s knee, or that groups will be singing carols in shopping centres this December, and at the time of going to print it was not certain whether restrictions might affect Christmas markets or other festive events.

It would, therefore, be wise to check with the local mairie and/or tourist office before setting off to see any of the events and attractions listed below.

The multiple Christmas markets in Strasbourg are the oldest, biggest and best in France. You can get lost in them, and the decorations are breathtakingly beautiful. Entire shop-fronts are covered in twinkly lights and snow, Santa pops up everywhere, and you are never more than a few metres from a stall selling vin chaud, hot chocolate or roasted chestnuts.

There are strings of gingerbread hearts, baskets of wooden toys, and sparkling glass Christmas tree decorations.

The Christmas markets in Colmar, Kaysersberg, Eguisheim, Mulhouse, Reims and Montbéliard with their traditional charm and cobbled streets are also worth visiting. You will feel as if you have walked straight into a Victorian Christmas card.

Christmas markets and temporary ice skating rinks are not the only attraction, however.

Although their origin is clearly religious, Christmas crèches have traditional and cultural significance

Across the country there are fabulous crèches to admire, many of them painstakingly illuminated and animated – and don’t think for a second that the scenes are confined to a Nativity scene with two model cows and a plastic lamb...

Although their origin is clearly religious, Christmas crèches have traditional and cultural significance; children tend to enjoy them on the simple level of them being dolls’ houses and model farmyards, and although most of them are set up in churches, some are installed at the entrance to the mairie, or in museums and increasingly, in chateaux which are open to the public.

They are so popular that in Alsace there is even a guide to crèches set up in the region, Noëlies, Le Sentier des Crèches d’Alsace which lists the various towns and villages and suggests routes to visit them.

Many French crèches are expanded way beyond the traditional scene in the stable to include all sorts of traditional characters in scenes ranging from the historic to the humorous. Look carefully and you see one of the card players cheating, one of the people in the bar falling off a chair, gossips leaning out of the windows, cheeky children, naughty dogs, lazy donkeys... all life appears in these scenes.

There is a particular focus on traditional skills too; people making barrels, repairing roofs, skimming milk for cheese, weaving, farming, and hanging out washing.

There’s very often a member of the clergy in the bar, someone cycling over a bridge, and an old couple having a siesta.

The tradition of recreating the Nativity scene probably dates back to the 12th century when Francis of Assisi supposedly organised the first crèche vivante in Greccio, Italy on Christmas Eve 1223 but there is evidence that troupes of players had been recreating the scene for several centuries, if not more. The first crèche to use little wooden statuettes was probably made in 1252 in Bavaria.

In France, the first known mechanised crèche appeared in Marseille in 1775 and, for unknown reasons, included not just reindeer but also hippos and giraffes.

The custom was suppressed during the Revolution but blossomed again in the 18th century with the invention of crèches in boxes with glass fronts.

Santoun is Provencal for ‘little saint’

In 1798, Jean- Louis Lagnel came up with plaster moulds in order to mass produce santons so that every household could afford their own crèche.

The irreverent Provencal mechanically- animated santons so beloved today appeared during the 19th century (a santoun is Provencal for ‘little saint’) along with the profession of santon-maker (santonnier).

The very first specialist market (Foire aux Santons) was held in 1803 and is still held every year. As well as stand selling santons, there are performances of traditional folk dances and demonstrations of santon-making.

If the best Christmas markets tend to be found in the east of France, the best crèches tend to be found in the south, although the tradition has spread all over France. In Grignan (between Orange and Montélimar) they aren’t content with just setting up one crèche; in the Village Provençale Miniature (a quirky miniature world open all year round) they install hundreds from all over the world.

While you are in Grignan, you cannot miss the imposing Renaissance chateau, once inhabited by Françoise de Sévigné – the daughter of France’s most celebrated letter-writer Mme Sévigné and recipient of a wealth of witty correspondence full of social observations.

The fully-furnished and restored Château de Grignan boasts 360- degree views of the surrounding lavender fields as well as an art museum, and is wonderfully evocative at Christmas. Comps (Gard) is lucky enough to have their very own homegrown santonnier. “Right from my earliest childhood I always loved crèches,” Romain Rodriguez said. “I used to love doing all the decor at home, and when I was eight I started helping with the crèche in the church, just teaching myself as I went along, and then when I was 20 I started making santons myself.”

The church’s crèche in Comps now covers 100m2 every year and attracts around 5,000 visitors, which is three times the population of the village.

“My favourite santons are the people from the village, the baker, the butcher, etc. I don’t copy real people, I just invent them. I enjoy making little jokes, like the pig wearing the Santa hat.”

His santons are 9cms tall, made of clay which is fired for 10 hours in a pottery oven. He then hand-paints them, personalising each one so that every single one is unique. Romain, now 31, works in a local hotel doing breakfasts but would love to become a fulltime santonnier. “It’s a craft and takes an enormous amount of time, so it would be very difficult to make a proper living out of it.”

Romain has built his crèche in Comps near Nîmes for the 14th year running, and it will be open from November 28 to January 24. Hours are Saturdays and Sundays 10.30am to 12pm and 2pm-5.30pm.

During the school holidays hours are 2pm-5.30pm every day. Entrance is free, and there is a stand where people can buy Romain’s santons.

Lisieux in Calvados also holds an annual exhibition of 250 Christmas crèches from 60 countries around the world. This year it runs from December 5 to February 2, 2021 and the country of honour is Germany. It is fascinating to see the way the Nativity is portrayed in other cultures and children will enjoy guessing where the crèches come from.

Lisieux is said to be the second most-visited devotional site in France after Lourdes. Sainte-Thérèse of Lisieux is known for her book The Story of a Soul, which is a collection of autobiographical and religious writings. She is the patron saint of aviators, florists, and missions as well as of Russia although she is not recognised by the Russian Orthodox Church.

Alongside Joan of Arc, she is a co-patron saint of France. It is said that at the age of seven, Edith Piaf was cured of blindness having made a pilgrimage to the grave of Sainte Thérèse.

As well as the Basilica de Sainte- Thérèse de Lisieux and the Cathedral of Lisieux, the nearby chocolate box-pretty Medieval/Renaissance Château de Saint- Germain-de-Livet, with its turrets and moat, is also worth visiting. There are guided visits around the fully-furnished interior. Keep an eye out for the spectacular white peacocks.

In the village of Lucéram, in the hills above Menton (Alpes-Maritimes) they really like their crèches.

They started off, like all the other local villages, with just one crèche in the Chapelle St Pierre in the centre of the village. Designed and put in place by Christianne Ricort, it gradually got bigger until in 1996 as the result of a light-hearted bet, it became a fully- fledged, 10m replica of the village containing no less than 80 large terracotta santons.

It wasn’t enough. Everyone in the village wanted to join in, and for Christmas 1998 the ‘Circuit des Crèches de Lucéram’ was organised by the Maison de Pays, with 33 crèches all over the village.

Today the circuit includes around 450 créches, all of them different, put together by different households, families and groups and displayed in porches, windows, garages, cellars, balconies, outside the front door... from September onwards the whole village is busy planning crèches, often unveiling surprises in December when they are all on display for the first time. Word has spread, and the circuit attracts thousands of visitors.

This year the circuit will be open from 10am to 12.30pm and from 2pm to 4.30pm daily from December 5 to January 10. Tickets cost €5.50 for the guided visit, and information is available from maisondupaysdeluceram@gmail.com

Volunteers at the Maison de Pays have established a museum of crèches containing around 500 more examples, from the humble to the seriously sophisticated.

Provençale or Neapolitan, local or international, they are made of matchsticks, fabric, cardboard, china, glass and everything else you can imagine; some are illuminated, some are animated, all of them are made with humour and Christmas spirit.

Check out the crèche in the ‘cougourdon’ (non-edible vegetable gourd) where the santons are made of gourd seeds.

There are also santons made out of clay, clothes pegs, wood, fabric, wrought iron, chocolate and even some knitted santons. There are crèches from Africa, Egypt, Morocco, Peru, Bolivia and of course all across Europe.

During the circuit, the museum is open every day and entrance is free.