Cookie Consent by FreePrivacyPolicy.com I was one of the 5,000 at France’s first indoor concert since Covid French News and Views in English | The Connexion
20 june 2021
Classifieds Currency exchange Newsletter
Login Register BASKET
Facebook Twitter

I was one of the 5,000 at France’s first indoor concert since Covid 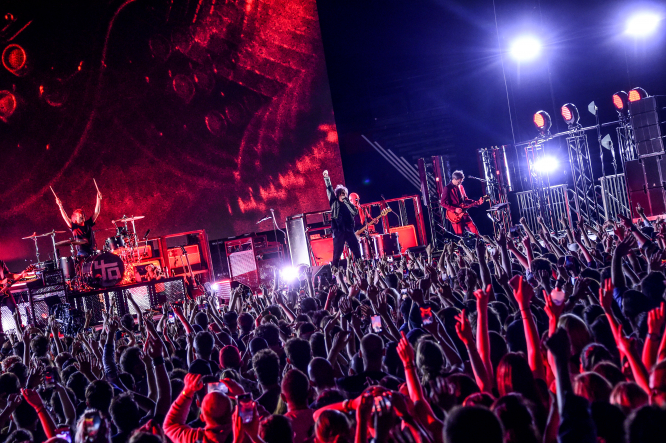 The 20,000-seat AccorHotels Area in the 12 arrondissement of Paris is normally a hub of music, sports and other live events but ­– along with all other stadiums, theatres and venues in France­ – it has been empty since the start of the health crisis.

After such a long silence, the venue finally came to life again on Saturday (May 29), and I was lucky enough to be there.

French rock group Indochine played to an audience of 5,000 in-person attendees, with a further 2,500 watching at home as part of the Ambition Live Again medical trial.

The event was organised by hospital group AP-HP de Paris and union for live events Prodiss to see if mask-wearing and testing would make it possible to hold an indoor live event safely, or if it would lead to a crop of Covid-19 cases among attendees.

After applying for a ticket two weeks ago, I was selected to be among the group of people attending the concert.

Walking up to the arena on Saturday night I see queues snaking out of the building, and people milling around outside. This used to be a familiar sight – now, of course, it feels unusual.

It is even more unusual to see so many people smiling, dressed for a night out, expecting a good time. The sun is shining, and the atmosphere is upbeat. People in the queue are chatting to each other even though tickets were selected by random draw and many attendees have come alone.

In front of me in the queue is Laura, who has come this evening because live music is one of the things she has missed the most since the start of the health crisis.

“I’m not that worried about Covid,” she said. “It doesn’t feel any riskier to be here than getting on the metro or going to a supermarket.”

“I’m happy to get back to normal life and to be at this concert, which is kind of historic.”

Another concert-goer, Tom agrees. “I’m here for the experience,” he said.

“I don’t go to a lot of concerts, but I work in sports events and this is the first event where there are going to be so many people in one place. It’ll be interesting.”

He feels completely safe attending the evening, mainly because of how well organised the trial has been, and how much attention has been paid to safety and security.

In the three days prior to the event, all concert-goers had a PCR test, which had to show a negative result for admittance to the concert to be approved. All participants are aged from 18-45 and cannot have any health factors that make them vulnerable to serious forms of the virus. Band members and staff for the concert were also tested.

On the night of the gig, we all bring saliva samples with us to be Covid tested a second time. We will send a third saliva sample by post one week after the concert.

Before entering the arena on Saturday, we also pass through two security scans, show identification, our tickets and proof of our negative test results on the TousAntiCovid app.

A secondary objective of the trial is to test out using the app as a health pass, to allow entry to events based on health criteria.

We are also made to take an obligatory squirt of hand gel, given two surgical masks ­– one to wear during the concert and a spare in case we lose the first one ­– and a bottle of water, so we don’t get dehydrated during the two-hour show.

And then we are inside. The area is transformed from the last time we saw it when we were here to get our pre-concert PCR tests. Then, the space was being used as a giant testing centre filled with dozens of medical staff walking around in hazmat suits.

Now, the crowd fills the arena floor. Participants in the trial ­– the audience – must stand throughout the concert, so the seats lining three of the walls are roped off and empty.

On the fourth, there seems to be a VIP section with a few dozen attendees who are not taking part in the trial. There were rumours in the days leading up to the concert that President Emmanuel Macron would be among them. He was not. But Health Minister Olivier Véran, Culture Minister Roselyne Bachelot and Paris Mayor Anne Hidalgo did make an appearance.

Yellow lines have also been taped along the floor outlining a giant rectangular box to contain the crowd. An unusual number of security guards and firemen line the edges.

Apart from that, it looks and feels like a normal concert. Even before the band comes onstage, the music coming out of the speakers is so loud you can feel it in your bones. It is thrilling to be in a large space with so many other people, multicoloured stage lights sweeping through the darkness and happy chatter in the air.

When Indochine takes to the stage, the reaction from the crows feels exceptional. After over a year of human contact limited to small groups of people, standing among 5,000 people cheering and clapping in unison is joyful.

There are other things that make the event feel unusual. Most obviously, everyone in the crowd is wearing masks. Although after almost a year of mandatory face coverings in public places means this looks stranger than it feels.

Everyone in the crowd is also unusually polite and considerate. There is no pushing or shoving – a woman in front turns around to apologise when she accidentally elbows me mid-song, and a man exiting the crowd shouts over the music “excuse me please!” as he passes through.

It is reassuring to know liquids thrown in the air during more raucous songs are just l’eau de Paris drinking water provided when we came in.

Perhaps this is because we are taking part in a medical trial where the measure of success is as many people as possible coming out of the experience in good health. Or because it’s still before 20:00 and no alcohol is being served on the premises.

But there is an undeniable sense of goodwill. As we return to large gatherings in France and around the world, it will be interesting to see if this is commonplace.

Indochine are playing tonight’s concert for free “to help the whole profession,” front man Nicola Sirkis said. Even though they are not being paid, Mr Sirkis promised to “invest in the concert to put on a real show”, and they do. The band runs through the hits in its in catalogue during an almost two-hour set, with the crowd singing along word for word.

Serkis also makes time for a minute of cheering for all medical staff, researchers, key workers and more who have worked so hard during the health crisis, and for the test concert to take place.

The idea for the trial was first floated in France six-months ago. Including the 7,500 participants, over 20,000 volunteers were needed in total for the event to go ahead.

As the concert draws to a close, Serkis ends with a message of hope: “Let’s hope this evening makes a difference,” he shouts. “See you soon.”

As the lights come on, the crowd lingers, waiting for the doors to open. My legs feel tired from dancing for two hours, something I haven’t done for a long time. It’s been so long since any of us have seen a live show, the two girls next to me can’t work out if they feel hungry or just full of adrenaline.

Outside it is only 20:15 and the sun is still shining. Some of the crowd stop to enjoy the sunshine on the steps outside the venue and on café terraces opposite.

Lucie has just left the concert. She is wearing an Indochine T-shirt. “It was incredible,” she says. “It was really moving to go to a concert again after so long, especially an Indochine concert.

“At first I was a bit stressed seeing so many people, but after I just felt full of joy. I cried. And then I felt sad that we’ve lost so much time with the confinement.

Listening to music with headphones just isn’t the same. We have to get back to live music again, soon.”

Similar trials in Barcelona and Amsterdam indicate this might be a possibility. Out of 5,000 attendees at the Barcelona concert, four tested positive for Covid-19 afterwards. Of these, only two were thought to have been infected at the concert.

The results from the Paris trial are expected at the end of June. The organisers hope they will give a solid basis for indoor live events to resume in France later this year.

18th century château in southwest France up for auction from €90,000
17 June 2021
More from Culture
More from Connexion
Get news, views and information from France
Join the newsletter
Subscribe to The Connexion