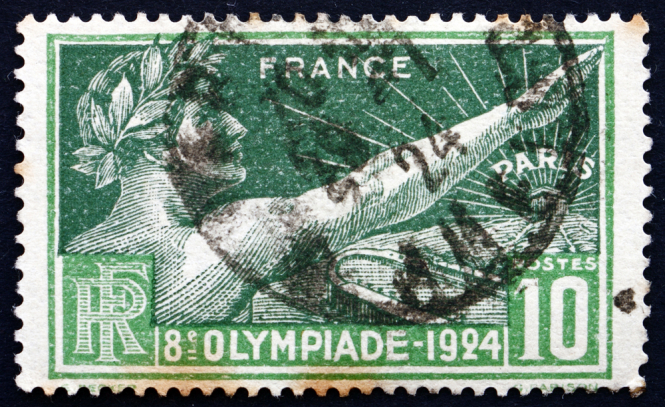 More than 58,000 people took part in a competition which lasted more than five months in Paris' first time as host of the Olympic Games in 1900.

Yet hardly anyone knew that the city was staging les Jeux Olympiques.

It will be different this time around, as France's capital city gets ready to host the 2024 Games. This will be Paris' third time hosting an Olympiad, marking the centenary celebration of the 1924 games enshrined in cinema history via Chariots of Fire.

The first year the games were open to women

The 1900 games have their own gold medallist of repute as Briton Charlotte Cooper became the first individual woman Olympics champion, in the tennis singles.

It was the first year the games were open to women – and she also won the mixed doubles.

One record set in 1900 still stands to this day for the number of competitors with 58,781 taking part in 477 events – although the IOC says many were there for Paris Universal Exhib­ition events as it was running at the same time.

The ‘official’ IOC version is that 997 athletes took part from 24 nations in 90 events covering 19 sports.

More conventional sports from 1900 included athletics, cycling, fencing, football, gymnastics, rowing and swimming, which have figured regularly or permanently in the Games ever since and will do so in 2024.

The 1900 Olympics were not the high-profile event they are now and teams and competitors could be a mixed bag.

The cricket title was won, as might be expected, by a team from England called the Devon and Somerset County Wanderers. Its members did not for the most part figure prominently in the cricketing bible, Wisden.

Only Alfred Bower­man and Mon­tague Toller ever played first-class (both for Somerset) while their French op­ponents were enthusiastic but inexperienced English expatriates.

Toller goes down as Britain’s most successful Olympic cricketer, having taken seven wickets for nine runs – all clean bowled – in one innings.

Football and water polo were other team sports that provided British wins, and none of the players were over-extended in their efforts.

The football was played at the same venue as the cricket, Vincennes velodrome, and the players were all from the Essex club Upton Park FC (no connection with West Ham). They beat Club Français, of Paris, 4-0 to be declared champions.

Only two matches were played. In the first Club Français outplayed a Belgian students’ XI 6-2, so there is little justification for these being Olympic events.

Osborne water-polo club from Man­chester had a bit more to do, winning the qualifying matches 12-0 and 10-1 and the final against the Brussels club 7-2.

At least these athletes have their niche in Olympic history – although for the cricketers it is only because one of them, John Symes, returned home with a scorecard.

The identities of the 20 or so victorious British yachtsmen are all but unknown and even those who are known may not actually have taken part. The IOC cites financier Cecil Quen­tin as winning the over 20-ton class off Le Havre, yet his yawl was actually 96tons and he must have had up to 20 crew to help (all unnamed). There is doubt that he was there at all.

Similarly with the British winners of the “Half-ton to one-ton class”, sailed on the Seine. The winning trio is listed by the British Olympic Assoc­iation as Lorne Currie, John Gretton and Linton Hope, but Hope, who designed the winning boat Scotia, was back home in England.

Currie owned the Scotia while Gretton (later Lord Gretton of Staple­ford) would be the only serving member of parliament ever to have won an Olympic title if he was on board.

Only one crew member can be identified as having been present, helmsman, Algernon Maud­slay, who was discovered by the late British Olympic historian Ian Buchanan, in 1991.

Despite athletics being a core Olym­pic sport, 10 athletics winners were also ignored until French professor, André Drevon, wrote a history of the 1900 games 100 years later.

These forgotten champions took part in events for professionals – the social and competitive divide between professionals and amateurs was wide and lasted for another 80 years – and there is confusion as to whether the professional meeting was part of the Olympic Games at all.

It was held separately from the amateur meeting and Prof Drevon said many events held in and around Paris from spring to autumn – May 14 to Octo­ber 28 – gave little or no indication they were of Olympic status with some clearly being exhibition sideshows.

The outstanding professional athlete was a Briton, Edgar Bredin, who won the 100 metres, 400 metres and 1500 metres, and ought to be seen even alongside Lord Sebastian Coe and Sir Steve Redgrave as one of the foremost British Olympians. His opposition was meagre, but that was the case in many of these early Olympic contests until seriousness and nationalism started to set in during the 1920s.

British amateur Charles Bennett won 1500m and team 5000m races and was second in the 4000m. His win in the 1500m made him Britain’s first track and field Olympic champion.

A railway driver based at Bourne­mouth Central Station, Bennett beat the French favourite Henri Deloge to win the 1500m in 4min 6.2sec, which was declared a world record.

In the team race, Bennett, Liver­pool policeman Jack Rimmer, Northants carpenter Sidney Robinson and Lancaster farmhand Alfred Tysoe were short of a fifth man and, remarkably, neither officials nor French opposition complained when Aus­tral­ian sprinter Stanley Rowley, who had finished 3rd in both 100m and 200m, was recruited to make up numbers.

He ambled around for a few laps and was then allowed by the track judge to discretely step off the track but still counted in the winning team.

Another Briton who deserves rem­embrance as one of the country’s great Olympians is the swimmer, John Jarvis, a member of the Leicester Swimming Club, who won the 1000 metres and 4000 metres freestyle events by huge margins.

Jarvis had developed his own form of side-crawl, and this proved so effective he was to win 108 international races during a career that lasted until he was 36.

He and his opponents swam downstream in the Seine to the bridge at Asnières (made famous in the 1883 painting by post-impressionist painter Georges Seurat) and he was more than a minute ahead of the nearest of his 46 rivals at the shorter distance and more than 10 minutes ahead of Hungarian world record-holder, Zol­tán Halmay, at the longer.

A way to promote fitness among the young

Despite Seurat’s painting showing young people swimming and rowing on the Seine, the idea of reviving the Olympics – the games had been held in ancient Greece at least from the year 776BC onwards – was promoted in the 1890s by educationist Baron Pierre de Coubertin, who was concerned at what he felt to be the poor level of fitness of French youth.

It was an associate of the baron who invented that acme of Olympic athletics events – the marathon.

Michel Bréal, who was an expert on Greek history, must have known full well that the inspiration for the event, held at the inaugural modern Olym­pic Games in 1896 over a 40km course from the village of Marathon (or Maroussian) to Athens, was in all probability a myth.

The first race was a success, largely because it was won by a Greek, but Mr Bréal would surely have been aggrieved by the way the Paris version four years later was conducted.

Certainly, the three British participants were none too happy with the chaotic circumstances in which the 40km race was run.

This was graphically depicted in a photograph which shows eventual winner, Michel Théato, nearing the finish, surrounded not only by a horde of accompanying cyclists but being led by another runner who would seem to be a gate-crasher as he is nowhere to be seen in photos from earlier in the race.

Britain’s Frederick Randall, Ernest Ion Pool and William Saward were all members of renowned cross-country clubs (Finchley Harriers, South London Harriers and Essex Beagles), but road-racing was such a rarity in Britain in those days that they were chosen because they had been the first three to finish the twice-as-long London-to-Brighton run.

Despite their obvious powers of endurance, the trio survived no more than a few miles of their journey through the Parisian streets.

Pool later complained bitterly it had been “a dismal fiasco” – from the officials’ lateness in getting race details out to the lack of “convenience of contestants” and the “entire absence of precautions to ensure fair play”, referring to the “non-sporting instincts of the French populace”.

Théato himself only learned of his Olympic success in 1912 when it was decided the 1900 race merited Olym­pic standing. He was France’s first Olympic athletics champion but had little time to enjoy his belated fame as he died in 1919 at the age of 41.

Research 90 years later revealed he was born in Luxembourg, so he was also the principality’s first champion.

Winning the 2024 games is a boost for Paris, which has had a disappointing record in previous attempts, failing in 1992, 2008 and 2012, losing out to Barcelona, Beijing and London.

One major criticism when Paris lost to London for 2012 was that few of its Games campaigners communicated in English – and English is the everyday language of Olympic committee-room negotiations.

So, Paris made a smart move with its Games slogan ‘Made for Sharing’. The English wording for a French event is not an electrifying message but a positive start to wooing the world. Will it be third time lucky this time around? On verra.

Bob Phillips is the author of several books on athletics and Olympic history and was for 17 years a member of the BBC Radio athletics commentary team. He and his wife live in Landes.

WHO recommends lifting of international Covid travel bans
23 January 2022
More from Culture
More from Connexion
Get news, views and information from France
Join the newsletter
Subscribe to The Connexion