Why French animation rules the world 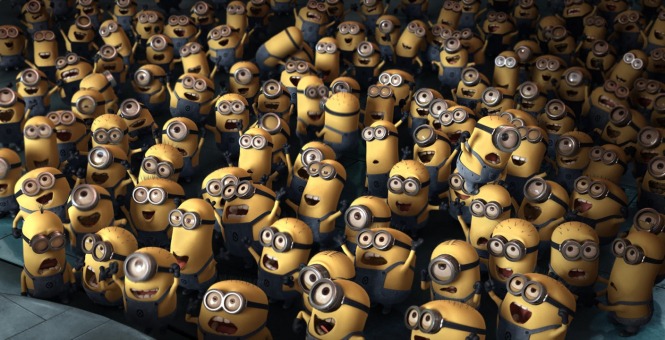 The country leads the world of animation with films such as Les Minions – written and co-directed by Frenchman Pierre Coffin – proving highly successful at the box office after their original appearances in the Despicable Me movies.

Behind this success are great schools and a first-rate state-funded system.

Animation college Les Gobelins, based in Paris, was recently voted the best in the world outside of America by the US website Animation Career Review, while three other French schools made its top 10 list.

Les Gobelins graduates have carved out illustrious careers in the animation industry. Coffin studied there, as did Kristof Serrand, the director of animation at US movie giant Dreamworks. Another maestro employed by that studio who also studied at the school is Rodolphe Guenoden, the man behind the original idea that inspired the Kung Fu Panda franchise – animation fans will also be familiar with his work in The Prince of Egypt and The Road to Eldorado.

As such Moïra Marguin, who teaches animation at Les Gobelins, is not surprised to hear it ranked among the best in the world.

She said: “Gobelins is historically already regarded as one of the best animation schools in the world. We are funded by the Chamber of Commerce, whose primary objective is to respond to the needs of the industry.”

This principle of state funding is at the heart of France’s success and dates back to the creation of the Centre National du Cinéma et de l’Image Animée (CNC) in 1946, which answers directly to the Ministry of Culture and is mandated to support film in all its forms.

The review that ranked Gobelins at number one, also placed Supinfocom Ribuka (in Arles) in fourth, Esma (with offices in Nantes, Toulouse and Montpellier) seventh and Créapole in Paris at 10th.

This state support is bolstered by the Soci’eté des Auteurs et Compositeurs Dramatiques (SACD), which dates back even further – originally founded in the 18th century to help playwrights, it now funds young writers and directors across all types of artistic media. The SACD also ensures that writers of all kinds receive royalty rights whenever and wherever their work is used.

Benjamin Legrand, a screenplay writer with more than three decades’ experience in the industry, is a regular beneficiary of the SACD, which he fondly calls the “old lady” and for which he has the utmost respect.

He said: “When an idea is broadcast or played somewhere you get money for it and more money comes from publicity.

“Given the percentage of publicity the TV channels get, that’s a very good system [for funding authors].”

Another core part of the French system’s success is its ability to move with the times while staying true to older forms of film-making that have retained their popularity.

Ms Marguin said: “Schools specialise often in 3D and sometimes in 2D but the aim is to harmonise the two. So now the two techniques are developed in parallel.

“The productions that have been made in the last few years are still for the large part done in 2D – developments that are taking place within the industry have not replaced it.”

Despite its state funding, the centre is not focused exclusively on France and French culture.

Ms Marguin said: “You have to have cultural diversity, it’s truly important in France. The CNC was created with this idea in mind. You get the best of both worlds – French films are promoted but foreign films are not discouraged either.”

Hence many productions in France tackle subjects that are not necessarily about French culture: “For instance the director might be French but the subject of the film might be about [foreign] history.”

The French system is particularly good at nurturing emerging talent – and yet its unique methodology was recently criticised by the European Commission for not being in accordance with European law.

Mr Legrand says: “It’s crazy – they want us to abandon a system that allows a small country like France to write 250 movies a year and I don’t know how many series and animation series, and that gives work to almost a million people in France?

“We call it a virtuous circle – the money goes to the authors and then it comes back. It creates employment – the money doesn’t just go to owners of big companies, the money is redistributed.”

This is because the SACD is owned by the authors themselves, who pay back a small percentage of what they earn to maintain the system that helped get them started in the first place. “It’s a system that could be introduced everywhere,” said Mr Legrand.

Ms Marguin agrees that the French system has created a cyclical process that is especially effective at nurturing up-and-coming writers and film-makers: “For every admission ticket to cinemas [sold in France] a percentage of money goes back into financing the CNC. That means the CNC is going to help writers’ projects.

“It happens that the films that make the biggest box office takings [in France] are often the American films with a big budget – thanks to this system these films in a manner of speaking indirectly finance the production of [French] films.”

Under this system, young writers with an idea and no funding can apply to the SACD or the CNC – if their idea is deemed good enough, they will get funding to turn it into an animation short.

Mr Legrand said: “When I was at the SACD one of my best jobs was to go to animation or short film festivals and give prizes for the best film – I felt like I was Santa Claus, giving €3,000 to a 22-year-old for his or her first three-minute animation movie [which has needed months of preparation].”

Such generosity appears to be working and few, if any, of France’s bright young animators are tempted to work abroad for long periods.

Asked whether many of her students feel the lure of Hollywood – a major player in animation films with box-office hits such as the Shrek and Kung Fu Panda franchises – Ms Marguin replies resoundingly in the negative. “Of our recent graduates, 36% have gone in the last year to work abroad – but for no more than six months. And that is mostly in Europe – although we do have some graduates freelancing for US companies.”

Given the level of support aspiring young film makers receive in France, this lack of flight is hardly surprising.

Mr Legrand said: “Go on the site of the CNC and you can see all the help that they offer.

“If you have never done anything before you will get different types of support. Every four or five months there is an open session, where you send your screenplay or synopsis in to get money to write. That’s how it works – [the submissions are] anonymous too, so there can be no bias!”

However, even the French system has some limits when it comes to deciding who to help.

When asked if submissions written in English are eligible for funding, Mr Legrand laughs wryly. “They have to be in French,” he said. “In France, we only work in French.”

That being said, English is frequently used on international productions: “If a French production has to work with Spanish or Swedish or Norwegian or Polish animation companies, we all speak English. We are trying to fight to keep French though – it’s spoken widely in Africa, it used to be the language of diplomacy, it would be a shame to lose it! The fight is still going on.”

Ms Marguin agrees that animation is an international industry that must rely on English for certain collaborative projects. She said: “Financing of a TV series in France today is done with 25% foreign funding on average. So there are collaborators on projects who communicate in English.

“At Les Gobelins we prefer to give more courses about cinema than language courses – but on the other hand we see that more and more schools are giving courses in English. “A lot of foreigners who come to study here at Les Gobelins are going to collaborate with Francophone students using the English language, working in teams. English remains by and large the language most commonly spoken among professionals in cinema animation.”