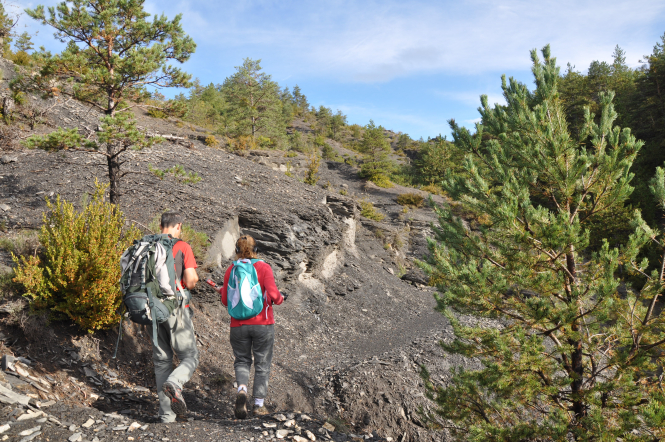 Hikers on the 150km Refuge d’Art trail in Haute-Provence can see several works of art by renowned British environmental artist Andy Goldsworthy, which were created to fit into the landscape

Sculptor Andy Goldsworthy created the route, named the Refuge d’Art, in the Unesco Geopark reserve in collaboration with the Gassendi Museum in Digne-les-Bains and the Réserve Géologique de Haute-Provence. It is the largest public collection of his work.

The route takes 10 days to complete and crosses the exceptional landscapes of the Haute-Provence park, which is equidistant between Nice, Marseille and Grenoble.

The 63-year-old artist is known for causing a stir. His latest work, Walking Wall, meandered brick by brick across Kansas City in the US before becoming a permanent installation.

Its journey lasted from March to December 2019 as the wall “walked” to its destination, cutting off roads on its way for several days.

The Geopark route combines contemporary art, hiking and the enhancement of the area’s natural and cultural heritage. It links up three stone cairns, each located in the heart of a valley, and follows ancient paths used by humans for thousands of years.

Goldsworthy wanted to mark the route with refuges in the form of disused houses belonging to the rural heritage of the land, including
chapels, farms and sheepfolds.

These have now been restored and a specially designed sculpture has been incorporated into each one.

They provide shelter for a rest along the hike, or the possibility to stay overnight in some cases.

The Refuge d’Art is just one of many possible artwork trails on offer in the Geopark, home to 18 geological sites that are more than 300million years old. They include fossil-rich areas and dramatic rock formations.

The Verdon river gorge can also be found there, with its 700m high cliffs and 21km length making it the second-biggest canyon in the world after the Grand Canyon in the US.

In collaboration with the Gassendi Museum and the CAIRN Art Centre, the association Art en Chemin brings together 13 tourism professionals – mountain guides and hosts – who have joined forces to introduce people to contemporary art in the heart of nature. The art is scattered throughout the vast Unesco Geopark territory.

All the Art en Chemin guides are trained in the subject of contemporary art and can offer useful and interesting insights into the artworks.
Guide Charles Speth said: “The way that Andy Goldsworthy has succeeded in establishing a close link between his works and the natural environment makes the combination of art and hiking an interesting concept.

“The materials he used were all collected near the site of the works: for example, stones with calcite veins from the Col de l’Escuichière or red clay from Vieil Esclangon.

“The same applies to the themes he focused on: the arches hidden in the basement of the Belon farm refuge (see image top right) have a connection with resistance fighters who hid in there during World War Two.”

The resistance fighters turned the farmhouse into a school where they learned about weapons, guerrilla techniques and how to operate as a team.

On February 14, 1944, German troops found and captured the men, who were imprisoned and deported.

Goldsworthy wanted to create arches for the basement space as there are only a few windows and a low ceiling in the room, meaning that the darkness is pierced by intense rays of light.

Because of this effect, the white arches are illuminated as if they are ghosts and give the room a sense of movement and circulation with their shape.

Mr Speth added: “The itinerary of the Refuge d’Art is an original concept as the environment and landscapes vary greatly along the way.

“There is such a wealth of flora, fauna, geology and heritage on this route. Art completes this ensemble to form a flawless whole.”