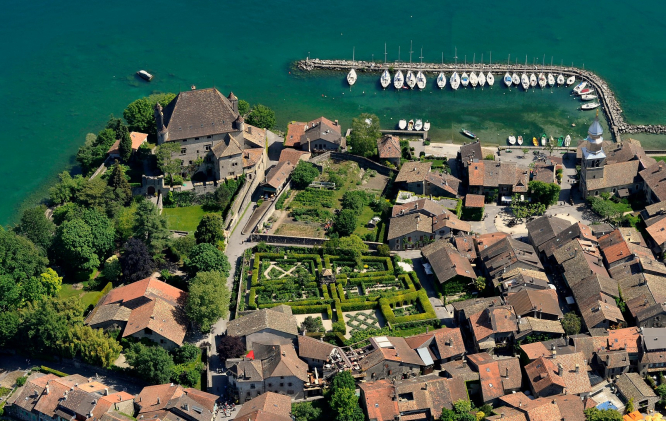 The village of Yvoire, showing the chateau and Jardin des Cinq Sens on the banks of Lake Geneva Pic: © Michallat

Since the 1980s a remarkable garden has attracted tourists in their thousands to the tiny medieval village of Yvoire on the banks of Lake Geneva close to Thonon-les-Bains. But this pretty lakeside town has not always enjoyed such providence. The Jardin des Cinq Sens’ creation and design in 1986 by the chateau’s owners reinvigorated a town that had fallen on hard times.

Amadeus V, Count of Savoy, inherited the burg in the fourteenth century and immediately set about restoring its chateau and building fortifications. He did so not just for aesthetic purposes, but to capitalise on Yvoire’s strategic position between the Petit Lac and the Grand Lac, controlling access to trade from Italy and Geneva in the upper Rhone valley.

The house of Savoy’s luck took a hit during the religious conflicts of the sixteenth century, when the northern part of the duchy was annexed by Swiss protestants and Yvoire found itself part of the new bailiwick of Thonon. The village adopted the protestant faith, but the chateau was burned to the ground during the conflict between the Duke of Savoy and his opponents.

The chateau remained little more than ruins until the beginning of the twentieth century when the Bouvier d’Yvoire family embarked on a rebuilding programme. The medieval gardens that once belonged to the chateau had also fallen into disrepair over the centuries, the fruit trees and flowers left to fend for themselves.

The garden even lost its direct link with the building to which it was bound, during the period of abandonment after the Revolution when the villagers developed a habit of using the gardens as a thoroughfare.

These cut-throughs became public footpaths, and then in the 1980s, the chateau’s parkland was separated into three parts, one of which owners Yves and Anne- Monique d’Yvoire transformed into a horticultural feast for the senses: the Jardin des Cinq Sens (Garden of Five Senses).

The owners joined forces with landscape gardeners Alain Richert and André Gayraud to realise their vision to restore and rebuild the forlorn and forgotten medieval garden. They kept the original plan of the old potager and its trees, and from that built a maze to create different garden spaces, each dedicated to a different sense or an aspect of the medieval garden.

Given that no garden from the Middle Ages has survived, on what did the d’Yvoires base their ideas? Historical records are few and far between — the meticulously drawn and labelled ninth-century garden plan for the monastery of St. Gall, for example, is unique.

A German monk, Albertus Magnus, left some precious information in his 1260 work De Vegetabilibus et Plantis. Whereas the gardens cultivated by medieval monks in monasteries focused on the spiritual healing of body and soul, Albertus mused on how the gardens of castles and chateaux had entirely more terrestrial aims. He describes how they “refresh the sight with the variety of their flowers.”

Although archaeological excavations are now revealing new evidence about monastic and aristocratic gardens, when Yves and Anne-Monique d’Yvoire undertook their project back in the 1980s, they had to look elsewhere for reliable source material: medieval manuscripts.

They chose wisely, because the painted miniatures contained in medieval books commissioned by the kingdom’s wealthiest nobles reflect back at us across the centuries, showing us in vivid colours and intricate detail the rich enjoying their pleasure gardens.

These precious images reveal how borders of plants and flowers chosen for beauty and fragrance edged the paths of chateau gardens. In these tiny paintings fair ladies seem keen to bathe their naked feet in the pools of fountains that mark a focal point between criss-crossing paths and areas of lush lawn.

Long before the creation of the Jardin des Cinq Sens, the French poet and traveller Alfred de Bougy arrived at Yvoire on Lake Geneva in 1844. When describing the village in a chapter called “Among the savages of Lake Geneva”, de Bougy instructed his readers to ‘imagine a bunch of ugly huts high up on a sloping, tormented, rocky ground that descends to the lake… there, everything is repulsive, deformed and reeks of misery. It’s a cesspit of malingerers and cretins.’

The inhabitants of Yvoire and the current custodians of the chateau d’Yvoire can now happily dismiss De Bougy’s poison-laced 177-year-old diatribe. The Jardin des Cinq Sens was awarded the label ‘Jardin Remarquable’ in 2004 and then again in 2016. The visitors who now flock to the medieval garden, and the village’s status as one of France’s ‘Plus Beaux Villages’, tell a dramatically different story — one of an ugly duckling transformed into a swan.

What to see at the Jardin des Cinq Sens in Yvoire

Roses, jasmine, lilies, and some surprises like mints and sages.

Vegetables and fruits as well as edible flowers arranged in beds inspired by the chessboard.

Ornamental grasses provide the framework for a garden full of contrasting textures, from downy soft leaves to giant brambles.

A rich tapestry of light blue and purple flowers designed to be restful to the eyes.

An ornamental bird bath symbolises the beauty of the bird song we hear in nature. The gardens will be open to visitors from 9th April.

22 hours ago
2
Which products are – or could be – hit by stock shortages in France?

Parisian photographer shows a much darker side of the City of Light
18 October 2021
More from Explore France
More from Connexion
Get news, views and information from France
Join the newsletter
Subscribe to The Connexion