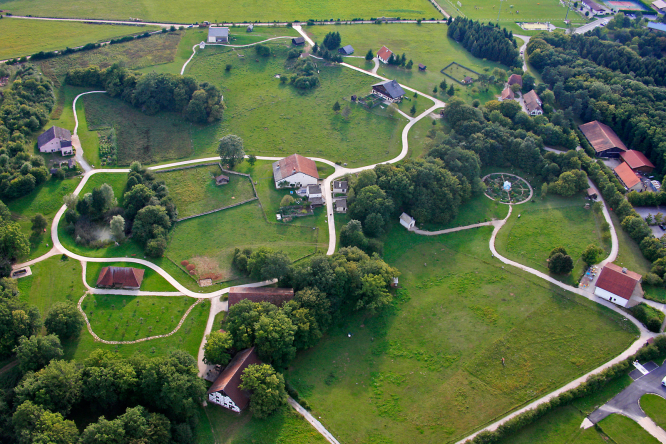 A mix of farms, workshops, communal ovens, chapels and other outbuildings make up eight units on the site Pic: Musée des Maisons Comtoises

The Musée des Maisons Comtoises is in Franche-Comté, a rural region to the east of France bordering Switzerland and covering four departments: Jura, Doubs, Saône and Territoire de Belfort.

It showcases different styles of housing to give an idea of how topography, climate and other factors influenced each one.

There are 35 buildings on the 15-hectare site, near Nancray, just outside Besançon.

Each was moved from its original site stone by stone, tile by tile, for accurate reconstruction. Even the buildings’ original orientation has been taken into account.

A mix of farms, workshops, communal ovens, chapels and other outbuildings make up eight units, each representing a different type of rural Franche-Comté architecture, specific to a local area.

Florence Coutier, the museum’s scientific and cultural director, says the aim was to show how every detail in the buildings served a purpose.

'Before the 20th century, builders had to use local materials and make their constructions to suit the local climate'

Now, with more transport, new materials and central heating, modern houses tend to be standardised across the country, so it is important to remember that styles used to be very varied.

“We can learn from these older buildings for the future. Climate change may mean we need to concentrate on local, natural resources and ways of being more energyefficient. We would not wish to go back to life as it was then, because it was extremely tough and we expect more comfort today, but, with modern technology, we can perhaps adapt some of the old ideas to suit contemporary lifestyles.”

The building from the highest, most mountainous region (also known for Comté cheese) is the Ferme des Arcesde- Morteau. It was built in 1784 at a 980m altitude in the Haut Doubs, a limestone area with plentiful pine forests.

Winters there are long, with temperatures going down to -20C, cold winds, and up to two metres of snow.

“The house was built so that as many of the farm activities as possible could be carried out inside,” says Ms Coutier.

“The animals were kept in an area adjoining the living area, separated only by a wooden bar, so the inhabitants could benefit from the heat they created. Hay and straw were readily on hand in the attic, which also gave insulation.

“The roof has a shallow pitch so that snow would stay on it, once again for insulation purposes, and most of the building, including the tiles, is made of pine shingles, a warmer material than stone.”

The kitchen, however, was built out of local limestone, to reduce any risk of fire. It was called either the tué or tuyé and had a bread oven and a huge pyramidal fireplace, which covered the room. It could be used for heating, drying the harvest and for smoking meat.

“There was a separate, small building nearby where people kept their most precious belongings in case the house did catch fire,” says Ms Coutier. “Next year’s seed, their Sunday best, and important documents would be stored there.”

In the north-east of the region, called the Sundgau Belfortain, the geography is very different. It is at a lower altitude, the trees are deciduous and there is not much stone but plenty of clay.

As a result, houses there were made of wattle and daub with their wooden frames filled with a mixture of clay, straw, water, sometimes sand and lime, and later with bricks made from the local clay. Three houses from this area are reconstructed at the museum.

“Here the roofs are steeply pitched without gutters because the rain was allowed to fall straight to the ground, absorbed by the soil.

“To prevent damp getting into the buildings, bulbous plants such as irises were grown close to the walls,” says Ms Coutier.

Another unusual feature was the chimney, which did not extend beyond the roof, but only into the attic, to fill it with smoke.

“This was deliberate to chase away rodents from the harvest stored there and to protect the beams from insect infestations. Nothing was left to chance.”

Here the land was not very rich, so agriculture was less important than in the Haut Doubs and farm buildings were consequently less extensive. Men often had to find work away from the home.

The oldest building on site is a communal oven, called a four banal

It was built in 1660 on the plateau of the Doubs, where there was plenty of limestone. Nearly every village had one or more quarries, so the buildings, including their roofs, were usually made of stone.

The climate was cold with snow, but not nearly as hard as in the Haut Doubs, and it was a grain-growing area.

“The communal bread oven, built in limestone, belonged to the local Seigneur de Montfort. Everyone could use it, but had to pay a tax to the seigneur for the privilege, and bring their own firewood,” says Ms Coutier.

“Very few people were allowed their own oven at home, so this was very hard on the inhabitants. The oven was on the ground floor, and the man employed to look after it had very basic accommodation upstairs.”

The building is typical of the area, with a roof made out of tiles called laves, placed horizontally and fixed in position with small stones. These roofs are expensive to replace and, as a result, they have become a rare sight.

Five other areas are represented at the museum, each with their own distinctive architecture. Ms Coutier says you can easily spend a day exploring the site, walking among the different regions of the Franche-Comté.

The museum is open until November 8 and reopens on April 1.